For Infinity the Movie

For Infinity the Movie is a fast-paced, tongue-in-cheeck movie with some catchy songs. It will officially premier during The Night of Art and Science, tomorrow evening.
By Tim Bakker / photo Sacha de Boer

He’s an alien: an Englishman in Groningen. Tom is also a typical student with typical student choices to make, like whether he should focus on his studies or instead hang out with a beautiful blonde named Sophie. The lustrum movie For Infinity tells his tale in a sunny and tightly-shot musical full of cheeky references, familiar faces and places.

After landing at the Academieplein, Tom is welcomed by rector Elmer Sterken with a Dutch greeting: ‘Welkom, Tom’, which means, well, ‘Welcome, Tom’. After he finds a room along with some roomies, he’s good to go – time to explore what Groningen has to offer.

At a blistering pace, For Infinity takes the viewer through all aspects of student life, from the first KEI-week to earning a master’s degree and posing for the obligatory family photo on the stairs of the Academiegebouw. In the words of Sir Elton John: ‘there’s more to see than can ever be seen, more to do than can ever be done.’ It’s a feeling every student has at some point. 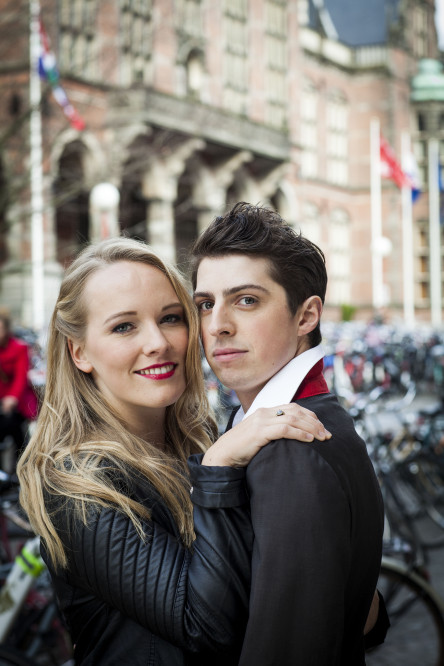 The movie, which is a little over half an hour long, is accompanied by a great soundtrack composed by Christiaan Coenraads. Producer and renowned Groninger Frank den Hollander, a.k.a. Rooie Rinus, plays a hyperactive teacher, teaching Tom all he has to know about Groningen. The 400-year university history, for example, is told in a song reminiscent of the theme song of The Big Bang Theory, and is equally hard to follow. And is that Bob Dylan singing all the studies the RUG has to offer? Ok, sure.

Meanwhile, sexy Sophie tries to get Tom’s attention. ‘Study my body’, she sings. It’s Christina Aguilera meets Lana del Rey meets Paradise By The Dashboard Light meets the University Library. It’s very confusing, but it works. The song during the end credits – ‘is this thing still not over?’ – will definitely stay stuck in your head for a while.

For Infinity is not just another promotional movie – the RUG merely serves as the setting. It is a fast-paced, tongue-in-cheek movie with some catchy songs. Even if some of the acting is not that great, and even if you don’t like happy, Glee-like musicals, it is still worth watching. It will officially premier during The Night of Art and Science tomorrow evening and afterwards will be  continually shown as part of the Student in Groningen exposition in the Groninger Museum. It will also occasionally be screened at other places like lecture rooms and the University Library.

For Infinity for internationals