Five years ago, Fabian Keijzer discovered that dancing was his motivation in life. But for a while, he had to hide it at work. Now, he's part of Usva modern dance group, who doesn't care about his age or profession.
By Blanca Civit

Fabian Keijzer, 32, is a PhD student and lecturer of Business Law at the RUG. At first glance, you see a professional man, dressed in a formal suit, busy at work in his office in the Harmony building.

He describes himself as an intellectual who is passionate for learning about theology and philosophy, but he’s open to any kind of new and exciting knowledge. Two years ago, Fabian discovered a new dimension within himself – a passion that changed his life and ambitions.

Five years ago, Fabian was working as a lawyer in Nijmegen. Although he loved the demanding work, he realized that his life was empty. ‘I was fed up. I reached my limits – I had the urge to change something in my life.’ 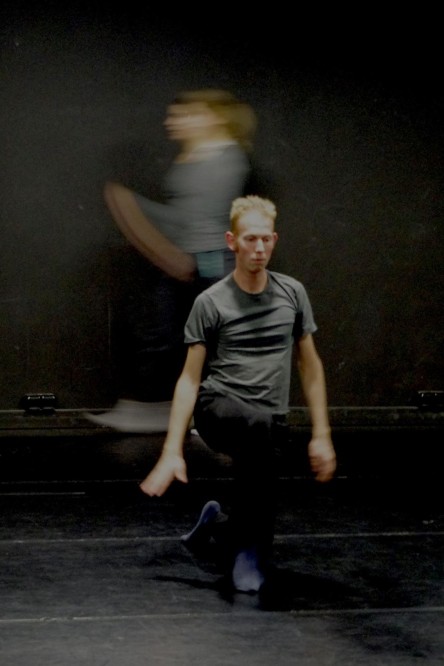 He decided to start working only four days a week and to use his free day to volunteer as a production assistant in a local theatre. ‘My work colleagues didn’t understand why I renounced working more and chose to earn less, but I don’t have the same ambition for money as they do.’

Volunteering made him feel alive – he discovered a new environment far from the competitive business world. At the theatre, he was assisting the actors behind-the-scenes, and he loved it.

Then came the day that he assisted dancers for the first time. ‘I had never seen a modern dance performance before, and that day, I was fascinated by the dancers of the production. Looking at them made me discover a new form of expression: body language.’

A new man in Montpellier

Although the volunteering job balanced Fabian’s life and work, he still felt empty. Every day, he became more interested in the dance world. ‘Seeing those dancers made me realize that I was not doing what I wanted in life, so that’s why I decided to quit my job and live in Montpellier for a while.’

During that sabbatical year in France, Fabian enrolled in several theology classes at the University and was surrounded by intellectuals. But it was dancing especially that kept him busy. ‘I decided to apply for the modern dance group of the University, and I remember being very scared after being accepted because I was a 29-year-old man who never danced before in a class with fourteen younger female dancers.’

Fabian says that learning modern dance was a very frustrating process. ‘I am not a man with an athletic body. I went to the gym in the past, but when I started dancing, I realized that my physical skills were not developed at all.’

After months of practicing and learning from his demanding teacher, Fabian performed for the first time in his life. Divagations Passagères was a 50 minute-long performance where Fabian had an important role.

Dressed in suit and tie, he deconstructed the male figure as a way to fight back against all the stereotypes about men who dance. ‘That choreography taught me to express more masculinity in my every day life and improved my attitude towards my body.’

After a fulfilling year in Montpellier, Fabian was offered a PhD position at the law department of the RUG. Happy with his new life, he accepted the job and moved to Groningen with the promise that he would never stop dancing. Fabian focused on improving his dance technique by enrolling in classic ballet workshops at Lucia Marthas and modern floor work with the Poetic Disasters Club.

He considered joining the modern dance classes at Usva, but he was afraid of how people would react. ‘Some colleagues judged me because, as a 32-year-old teacher, I could be dancing with my law students. They thought it was an awkward situation.’

After two years of dancing an average of four hours a week, Fabian is more than convinced that he made the right decision. He wound up joining the Usva classes after all. ‘I accepted that dancing is my motivation in life and for a while, I had to hide it at work. Nowadays, I am proud to be part of the Usva modern dance group who doesn’t care about my age or profession.’

For Fabian, dancing is experiencing happiness mixed with frustration, which motivates him to improve. It’s a philosophy that can be applied to any aspect of life. ‘While dancing, I confront my body and my brain. I feel naked and totally myself, that’s why I love it.’