Suddenly there she was with her very own Facebook page. Pop star Veronica Sommers was living in Groningen. But how come she looks so much like international student Maybelline Massey?
By Ahmed Farah

Her Facebook page shows her during the visit of the King and Queen to Groningen, towering above her fans on the Grote Markt. She talks about her love of shopping and animals, and you can see her signing an autograph for a fan.

Maybelline Massey’s face is on flyers all around the Harmonie Building and you can hear her singing the debut single Die Young of her alter ego Veronica Sommers on Happy Hour FM and YouTube.

When she’s not a 25-year-old International and European Law student from Canada, she’s Britney Spears, Nicki Minaj and Kesha rolled into one – Veronica Sommers, the main character in GUTS’s latest production, Pop Turd. 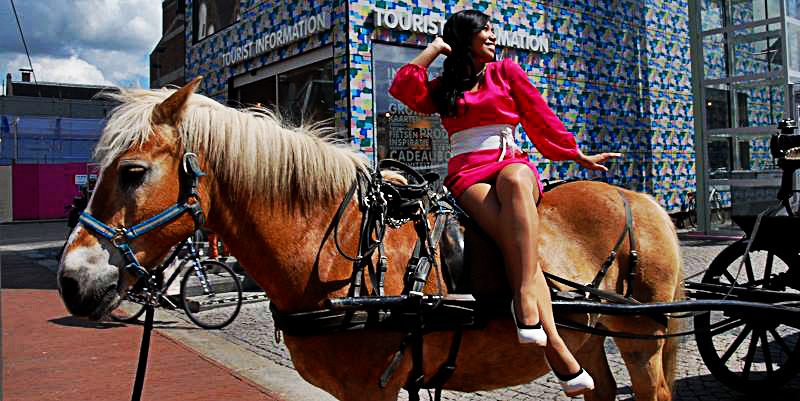 Maybelline laughs: ‘We launched the Facebook page without introducing the play. Some of my friends thought I’d gone crazy and was going through an identity crisis, or trying to live out my lost dreams of being a pop star.’

The play is both a comedy and a social commentary. It makes a joke about talentless pop sensations who rise to fame on the basis of their good looks or wild personalities and then return to obscurity after their 15 minutes of fame. Then there’s the interactive part of the play, with the tagline ‘Who Killed Veronica Sommers?’ – although that depends on the audience’s opinions during the play. The audience are witnesses to the crime.

To drum up interest in the play, director and co-writer Bobby Makariev – a Bulgarian Arts, Media and Culture student – decided to turn Veronica Sommers into a real person. She has her own Tumblr and Facebook pages, on which she posts photos of herself dressed extravagantly or signing autographs. ‘We wanted to go viral and achieve the same effect we saw in bigger Hollywood productions.’

Though time-consuming, Maybelline enjoys running around with the GUTS photographer pretending to be a pop star. It’s something she’s always wanted to do. ‘My face is now all over the place. I love it…secretly.’