‘A bullet near your head is fucking scary’

Ten bright Tunisian students attended the very first RUG Winter School on Human Rights. Among them, Omar, who lived through the Jasmine Revolution.
By Christiaan Triebert

Omar Khadhraoui, a 26-year-old Tunisian student from Sousse, recalls the moment a policeman spotted him through a window in a university building and fired a bullet. ‘It nearly hit me. Oh man, the sound of a bullet flying near your head is fucking scary.’ 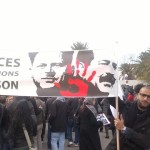 Students of the arts faculty began to protest in solidarity with the Sidi Bouzid Revolt.

Together with nine other students from Tunisia, Omar participated in the RUG’s first Winter School on Human Rights and Transitional Justice, held between 8 and 17 December. They’re all highly ranked students of Sousse’s Faculty of Law and Political Science, and Omar tops the list.

He feels lucky and privileged that the Dutch Embassy in Tunis granted him a scholarship that provides for his travel and participation costs to come to Groningen. Accommodation is partly provided by RUG students – and I’m one of them.

‘A law professor eventually helped me out of the prison.’


Wandering together through Groningen, Omar tells me about his experiences during the Jasmine Revolution four years ago. He and his fellow students joined nationwide protests against long-time President Ben Ali. The protests were triggered by the self-immolation of fruit seller Mohamed Bouazizi after his wares were confiscated by police and he was publicly humiliated in Sidi Bouzid, now seen as the cradle of the Arab Spring.

Omar remembers it clearly. ‘It was on January the 6th. Students of the arts faculty began to protest in solidarity with the Sidi Bouzid Revolt. At their faculty, they faced a 5,000-man-strong police force. We, students of the Faculty of Law and Political Science, decided to join them.’

High unemployment, food inflation, corruption, poor living conditions and a lack of political freedoms are widely seen as the causes of the demonstrations.

After an uncertain and unstable time, Ennahda – the moderate Islamist movement – was chosen to draft a new constitution and to function as a government until the first parliamentary and presidential elections. But things turned out differently: political opponents of Ennahda were killed, sparking new demonstrations.

‘We took to the streets again, but this time, it was worse’, Omar says. He is certain Ennahda cannot be combined with democracy. ‘It is under their rule that I got beaten up so bad and ended up in prison for demonstrating. A law professor eventually helped me out of the prison.’

Ennahda made way for a technocratic government. After the approval of a new constitution, the secular Nidaa Tounes party beat out Ennahda in the parliamentary elections. This upcoming Sunday, the second round of the presidential elections will be held. Omar says, ‘I don’t support any of the candidates, but you know, it is rather a symbolic function.’ 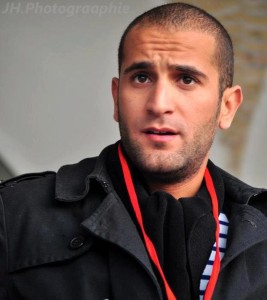 Whereas other Arab Spring countries are still far away from a democratization process, Tunisia is seen as a model for the region. Some suggest that this is thanks to Ben Ali’s political institutions that are still intact – a complete overthrow of the system may have led to chaos and conflict.

But Alaa’, an Egyptian participant of the Winter School, disagrees. ‘How can you call this a revolution when parts of the old system are now functioning in your new government?’

The Winter School is important for Omar. ‘It is a unique opportunity to develop my knowledge to improve my country,’ he says happily. Experts from Egypt, Germany, and the United States volunteered to travel to the Netherlands to give lectures to the students about human rights and transitional justice.

Omar likes the Netherlands. ‘I was told that the Dutch are not-so-friendly, rather arrogant people’, Omar says. ‘But nothing is further from the truth. People are so friendly here! When I ask for the way, they just immediately take out their phones and show me the way.’

He believes Tunisia lacks a work culture – by contrast, ‘The Netherlands has a staunch working culture. In Tunisia, we lack the respect for work’, he says.

But Tunisia is not yet secure. Its economy is poor, officials are seduced by bribes and the country is one of the main suppliers of jihadists to Iraq and Syria. Nevertheless, Omar is optimistic. ‘We’re doing great compared to the region.’

Meanwhile, here in Groningen, one thing that amazed Omar was the size of the Drie Gezusters. He almost got lost inside it – ‘This pub is so big, you can order a cab from the table to the bar.’

After a pleasant night in the Poelestraat, we walk past the Academy Building on the way home. ‘The tower looks pretty spooky now, in the foggy night and that bright shining moon’, I say. Omar looks at it for a moment, then says: ‘The only thing we should fear is ourselves, the human being.’