The attacks that took place last Friday night in Paris are all over the news, but the opposite is true for the recent attacks in Beirut and Iraq. Three students with strong ties to the region reflect on these differences.
By Maaike Vos

Jay Khalil, a 27-year-old prospective RUG student from Baghdad, understands the amount of media attention the attacks in Paris received. He is beyond doubt: ‘Everyone should condemn these events.’ However, he continues, it is striking that there is such a high contrast between the media attention for both acts of aggression. ‘It’s sad to see that there are apparently differences between people, religion, and color.’

‘I do understand it, but I don’t think it’s fair’, says Habib Rahmeh, a 29-year-old Hanze University of Applied Sciences student from Lebanon. ‘A loss of life is worth writing about, regardless where that person comes from.’ Rahmeh lived in Beirut for 20 years and says that western media might think that suicide attacks are very normal in the city. ‘In Paris, violence is rare. In the Middle East, it is considered as a given.’ But in Beirut, such attacks are not common at all, he explains.

Noor Lekkerkerker, a 25-year-old Dutch student who obtained her bachelor’s degree at the RUG, confirms this. She is currently studying in Beirut. When the attacks took place, she was having dinner with colleagues. ‘I don’t live near that neighborhood, but I do cross it sometimes when I go to the south’, she says.

Many people in the Netherlands ask her questions about her studying in Lebanon. They want to know if it’s safe and think that these sorts of events happen over there constantly. ‘And of course, the risks of retaliation were high because Hezbollah is openly involved in the war in Syria.’ However, she criticizes the media that called the affected area a Hezbollah stronghold. ‘The saddest thing is that only innocent civilians got killed in the attacks.’

During the Paris attacks, Facebook’s Safety Check system which had so far only been activated after natural disasters, was suddenly available for people living in the French capital. By using this system, they could let their friends and relatives know that they were safe. And they did so in large numbers: more than 4.1 million people responded. Apart from positive responses, this new feature also got a lot of criticism because it wasn’t activated in Beirut or during attacks in Iraq. 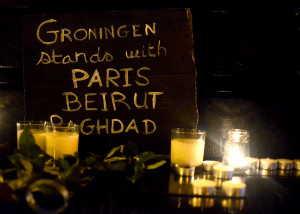 Some people felt Arab lives didn’t matter. Facebook founder Mark Zuckerberg was quick to respond. ‘We just changed this and now plan to activate Safety Check for more human disasters going forward as well.’ He underlined that Facebook cares about ‘all people equally’, and thanked everyone for their concerns. Alex Schultz, Facebook’s Vice President of Growth, added: ‘There has to be a first time for trying something new, even in complex and sensitive times, and for us, that was Paris.’

The three students agree on the importance of this system. Khalil calls Safety Check ‘a beautiful gesture’, but underlines that it’s also nice to do it for other countries. His mother and sister are still living in Baghdad. Rahmeh has a lot of friends living in Beirut. ‘I live in the Netherlands right now, but I wanted to check how they were doing.’ Lekkerkerker thinks the system could have helped Lebanon. ‘There was a lot of uncertainty in the affected area.’

Although traditional media focused more on the attacks in Paris, social media have provided us with a more balanced picture. ‘Social media helps a lot by putting these events into perspective’, says Rahmeh. According to him, the European press might report more on France because of the European Union. ‘You feel like it’s part of you.’ Khalil says he doesn’t believe in borders and calls them something we’ve created. ‘We all breathe the same air.’

‘You feel like it’s part of you’
Even though the events have sparked the debate about the differences in media attention for the West and the Middle East and increased awareness, Khalil and Rahmeh have mixed feelings. ‘We say we are tolerant, but we first check our own backyard’, says Khalil. ‘Western lives matter more from the perspective of Western people’, adds Rahmeh. He thinks this happens unconsciously and he doesn’t have any hard feelings about it, but he wants the West to know what people in the Middle East live through every day. ‘A human life is a human life.’