That’s almost certainly not the number that will actually be studying in the Netherlands this fall, though. That enormous figure fails to separate the students who are enrolled from those who become registered by the university.

Another reason to count those totals separately is that international students, unlike Dutch students, are likely to apply to multiple universities and only later choose which one to attend. That means that several universities could still be counting some of the same students at this point.

Likely to be lower

Maastricht University press officer Caroline Roulaux says, ‘We indicated that you can’t really say much about how many students will register here in September based on these numbers. That clarification was lost in the De Volkskrant article, alas.’

The article doesn’t mention Groningen, but the University of Amsterdam (UvA) was included for their seemingly remarkable numbers: an additional 3,500 non-Dutch students could be wandering around on campus this fall. But Laura Erdtsieck, the spokesperson for UvA, confirms that that number is also a combination of both enrolments and actual registrations. ‘The definitive percentage will in all likelihood be lower’, she says. 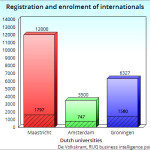 The actual registration numbers are a small percentage of the figures.

A category called ‘unknown to DUO’ gives a more realistic figure. DUO is responsible for the financial aid for degree students in the Netherlands, which actually includes international degree students as well, but the classification name remains in the business portal. As of last week, that number was 1,580 international students for Groningen, which is in keeping with the projected attendance for the welcome ceremony of 1,800. Comparatively, the University of Amsterdam had 747 and the University of Maastricht had 1,797 as of last week.

As for Groningen, there are 6,327 new international students who have either enrolled or registered at the RUG, a number more in line with the figures reported for the other universities.

Jan Wolthuis, staff official for Students & Education at the RUG, says that none of these numbers can really give an accurate indication of how many international students will actually materialize in the classrooms starting next week. ‘You can do anything with numbers depending on your definition’, Wolthuis says. ‘It’s a question of whether or not you base the student numbers on just one moment and, if so, which moment you choose.’

He emphasises more accurate numbers of registered students for this academic year will not be known until mid-October, but even those could have a margin of error of hundreds of students who have transferred or begun a new academic programme. DUO compiles its own definitive count around February.

Wolthuis encourages focusing on the overall trends rather than getting hung up on the current numbers, though. ‘As soon as you write these numbers down, they’re already out-dated. In general, the trends to keep in mind are that there has been a slight increase in new student numbers throughout the Netherlands and that Groningen is performing better than average in that respect, second in totals only to Utrecht.’