Cudi Turk (21) plays American Football for the Groningen Giants. What does a real American think about his national sport played by the Dutch?
By Marieke Voppen 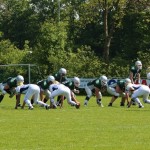 American Football is one of the most popular sports in the United States and the one with by far the most supporters. But in the Netherlands, only a few people even know the game.

Cudi, originally from Honolulu, Hawaii, grew up with American Football. ‘I really love it. Running and hitting people, it’s so much fun.’

American football is about two teams of eleven players each. Each team tries to bring the oval ball – the football – down the field by running with it or passing it to the other players of their team.

There’s a big difference in the way the sport is organised in America and the Netherlands. Here, you have clubs, but in the U.S., it’s all about university teams. ‘When I was little, I dreamt of playing for the university team’, Cudi admits. 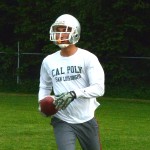 Cudi Turk: ‘I’m so competitive. I think it is hard to lose.’

Cudi is a political science student and studies at Northern Arizona University. The school has its own American Football team. ‘The level over there is so much higher than here in Holland’, he says. ‘In my country, the atmosphere is very competitive. Everything has to give way to the sport.’

He started throwing the football around when he was about ten years old and played all the way through high school. However, he wasn’t good enough for the university team, which takes only the very best players. ‘They are recruited from all around the country’, Cudi explains. ‘They receive scholarships to play. Here, I have to pay membership fees’, Cudi says, laughing.

He already checked out the possibilities for playing before he came to Groningen. ‘By accident, I found the website of the American Football Club Groningen Giants.’

Now, Cudi practices twice a week with his team called ‘Senior Tackle’. ‘I love it’, he says. ‘My team members are nice and they come from all around.’ Besides Dutch, there are also German and Canadian guys.

The team is quite good, Cudi thinks. ‘The level is not bad at all, but in America the game is bigger and faster and much more competitive. The whole life of the players is focused on American Football.’

During the weekends, Cudi and his teammates get to compete. They participate in the ‘first division’, which is the second highest in the country. ‘For games, we travel all around. I like it because I get to see different parts of the country.’

But Cudi doesn’t take losing well. He gets quiet. ‘I’m so competitive. I think it is hard to lose. When that happens, I have to walk away. You should leave me alone for a while.’

‘To become a better team, we should practice more. Especially together’, Cudi thinks aloud. ‘Sometimes that’s hard because of the different schedules of everybody, but in America, the university teams practice every single day.’ That makes a difference, of course.

Cudi returns to the United States next month. ‘Back home, I will miss my friends and teammates from Groningen.’ But he will be playing American Football again, with players that are probably just as competitive as he is. 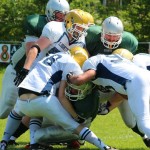 ‘In America the game is bigger and faster and much more competitive. // Photo Groningen Giants