Three men plan to rob a young female student in a park. A passer-by saves her, but quickly dissappears. Her search for her hero begins.
By Christiaan Triebert

It may sound like a script from a romantic comedy, but it happened to Russian student Anna Grigorjeva, she says.

What happened to you?

‘While working on some assignments on my laptop in the Noorderplantsoen, three men were standing in the bush, watching me. I didn’t notice them, until a passerby shouted “watch out!” Two of them immediately ran away, while the other grabbed his scooter and quickly drove off.’

‘Yes! And the man that shouted to me was already gone when I realized what had happened. So I went in search for him. I stuck a written note on a tree and asked a local newspaper to post the story. They helped me, and I got coverage on radio and television, as well! Can you believe that? And it worked – I found him.’ 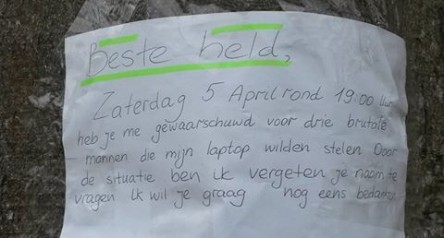 ‘Well, I cannot tell you. He doesn’t want to be in the media.

A mysterious hero, it seems. How did you thank him?

‘I offered him a dinner and he was thankful, but I also cannot tell you whether we had this dinner or not.’

Is there anything you can tell us about him?

‘He’s a Dutch guy in his twenties. I really can’t say more, I’m sorry. I guess he has to remain a mysterious hero to the world.’

Will you ever study again in the Noorderplantsoen?

‘Yes, I already have. But this accident made me aware that even in cozy Groningen, you have to be aware, just as in my hometown of Moscow. I hope everyone would follow the example of this brave young man.’