Anti-hangover box made to order

Hungover one afternoon, Mats Zwerink and Tim Wielinga recognised that there is a gap in the market when Mats came up with the idea of a breakfast service for students. Tim immediately thought of a catchy name: the Brakke Box (Hangover Box) was born. When the plan was worked out a week later and RTV Noord picked up the story, the ball really got rolling.
By Nina Mooij / Translation by Sarah van Steenderen

In the meantime, they have registered at the Chamber of Commerce and they have started making deliveries, a job Tim was keen to take on. He makes the deliveries on a scooter bought just for this purpose, often joined by a friend. This enthusiastic approach has led to a steadily growing number of orders and regular customers.

Yet the business owners claim their success is mainly due to what is in the box. ‘It’s just really good’, says Tim. ‘That’s what makes the difference for people, and it’s why they keep coming back.’ Eight euros buys you, among other things, freshly baked bread (‘hangover dough’, according to Zwerink), toppings, a banana, a soft drink, and the choice of coffee or tea. Also included is a raw egg, which the customer can prepare as he or she likes. Hungover students may not need to go to the supermarket, but they cannot avoid the kitchen.

‘We figured: how hard can it be?’
They have been awoken by a phone call from Giel Beelen, interviewed by 3FM and Qmusic, and featured in Linda, Metro, and RTL Z. Mats and Tim make no bones about it: the attention is the best part of the whole enterprise. And it is not just the media that are paying attention – their Facebook page has more than 1,700 members, all of them leaving comments and reviews. They were a little overwhelmed, but they are now better equipped to handle both the positive and negative consequences of their success.

‘We figured: how hard can it be? We register with the Chamber of Commerce, and then we’re done, ready to go’, Tim says, laughing. They have since reconsidered: not only is owning your own company more work than they had previously thought, but they quickly found out that every success has its drawbacks.

‘There are a lot of fortune seekers’, says Mats. For example, after a few articles had appeared in the media, the international domain name Brakke Box had suddenly been sold, even though it was previously available. This has led the boys to consult a friend who is a law student for legal advice so as to prevent abuse. And anyone placing an order at Brakke Box now has to agree to a set of terms and conditions. 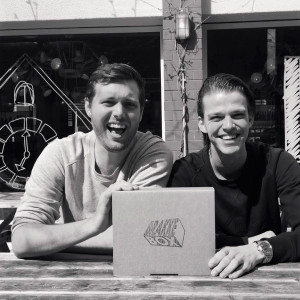 Tim Wielinga (left) and Mats Zwerink with the Brakke Box.

This more serious approach was borne out of necessity, but it also matches Mats and Tim’s ambitions. Business is so good that they are thinking about expanding, first to a larger postal code area and then perhaps even to another city. Yet they both remain down to earth. Tim summarises the company mentality: ‘It’s good work, but it has to be fun.’