Young people who are extra sensitive to rewards are more often prone to alcohol or drug use. Moreover, they ‘see’ that beer everywhere. Something can be done about that, thinks PhD candidate Madelon van Hemel.
By Christien Boomsma / Translation by Sarah van Steenderen 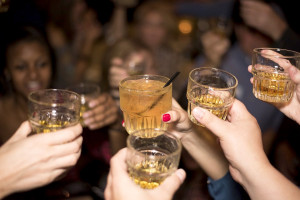 Before she studied psychology, she had a different life. For six years, Madelon van Hemel worked as a youth worker on the streets. She frequently found herself asking what it was that makes one person enjoy drinking and smoking weed while another does not care at all? How is it possible that twenty years down the line some people have their life in order with a house, a job, and a dog, while others end up in the gutter?

This question remained with her as she studied psychology and it popped up again in her master thesis. She suspected it had something to do with unconscious processes in the brain and automatic behaviour. But how does that work exactly? And can something be done about it?

Now – with four years of psychology, a master’s degree and PhD research behind her – she is much closer to the answer. It turns out that young people who drink or smoke weed a lot are extremely reward sensitive in general. She discovered this after analysing the data of 750 young people who were tracked during the Trails study.

And that is interesting, because it was previously known that addiction affects the reward areas of the brain. A beer or bump give the user a good feeling that says ‘well done’. Now, it turns out that that sensitivity already exists before addiction becomes an actual issue.

‘Three years later, I looked at that group again’, Van Hemel says. ‘It turned out that the people who had in the meantime switched to hard drugs more quickly used more than the other young people.’

In other words, she was on to something.

‘When you want to lose weight, you suddenly see everyone eating ice cream’
You might think this is all very logical. After all, those young people were already drinking. Of course they enjoy being rewarded. But the computer tests they had to complete had little to do with alcohol or drugs. ‘They performed a task where they had to press a key as quickly as possible whenever a little square appeared on screen. This would earn them points. But first, they saw an arrow that pointed to where the square would most likely appear.’

Their ‘reward’, therefore, was completely virtual. Yet the young people who drank or smoked weed turned out to focus much more on the area of the screen where the square was supposed to appear. In other words: ‘They strongly seek out things that feed their reward system’, Van Hemel concludes.

Now that she had created the basis, Van Hemel switched to the next phase of her research. This time, she wanted to know if addicted young people would get distracted if alcohol or drugs were in their vicinity. ‘They were presented with two pictures that looked a lot alike: for example a glass of beer – recognisable by the head of foam – and a glass of Fanta.’

Next, an arrow would appear under one of the pictures and the test subject had to press the corresponding key on the keyboard. It turned out that addicted young people were relatively slower in spotting the arrow under the Fanta than under the beer. ‘Their attention was automatically drawn to the beer’, Van Hemel explains, ‘which caused them to have a lower score on the test.’

This means that they are so strongly drawn to the beer that it gets in the way of their conscious control.

What shocked Van Hemel even more was that young people who had been undergoing treatment for quite a while had the exact same score they did at the beginning of their track. Does that mean that treatment has absolutely no effect?

Of course not, Van Hemel is quick to say. Young people by definition are a hard group to help and are often not very motivated in their treatment. Seeing that their treatment is not going smoothly is not that big of a shock.

The chances of a relapse are high even in treatments that initially go well due to a motivated addict. ‘It’s all well and good for a while, but it takes a lot of conscious control’, Van Hemel knows. ‘When you want to lose weight, you suddenly see everyone eating ice cream. Ignoring that trigger takes a lot of effort and after a while, your cognitive capabilities are exhausted. If something goes wrong at that point – you lose your job for example, or school’s not going well – you can relapse.’

It does mean, however, that there is room for improvement, for example by trying to tackle those automatic processes in the brain that make these young people so addiction-prone. If you can make them pay less attention to that beer or that joint in their environment, they will be less exhausted and the treatment is potentially more successful.

Van Hemel is happy, therefore, that following the research she has just finished, she was able to procure another research grant to expand that idea. 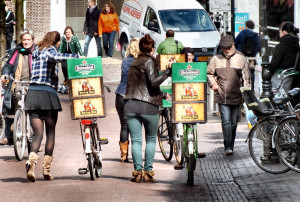 In the spring, she will train addicts to direct their attention elsewhere with yet another computer programme. ‘They’ll be seeing an entire range of moving pictures on their screens. But the assignment will be to consciously avoid the alcohol’, she says. By practising for ten minutes every day, she hopes they will be able to make new ‘pathways’ in the brain.

She realises that it will not solve the addiction problem. It is too complex for that. But even if it helps just a little, she will have made her contribution. ‘That’s all you can hope for.’

Hangover cure in a box