Groningen's carillon player Auke de Boer is using the bells in the Academy Tower to honour David Bowie’s music for the coming weeks.
By Traci White

Auke de Boer’s office is located close to the top of the Academy Tower, and his instrument – the carillon – is at the very tip top of the tower. He has been the carilloner there since 1996, and on Tuesday morning, he was programming one of David Bowie’s most beloved numbers – ‘Space Oddity’ – to ring out across the city centre for the coming weeks.

‘Even on this old instrument, it’s possible to play that kind of song’, De Boer says, seated on a stool in front of an array of wooden pedals. ‘It’s my duty to try to make a transcription to this instrument and to ask myself: what can I do with this music so that people can at least recognize it even on this instrument?’

To reach his office, you walk up the winding marble stairs of the Academy Tower, head around the corner into the Honour’s College, climb a wooden stair case, and open a door bearing the message ‘please close this door’ in chalk. Then, there’s a sweeping blue metal staircase clinging to the walls of an open, circular room flanked by windows with spectacular views of the city. At the top of the stairs, a wooden platform leads to yet another short flight of wooden stairs, and then you’ve reached him.

But the instrument that he plays rises even further above his spot. A sturdy wooden ladder grants access to the roof of his office, and it’s two more ladders to climb from there before reaching the 25 bells of the carillon itself. De Boer makes his way around the Escher-esque setting with ease and climbs down all the ladders and stairs backwards. 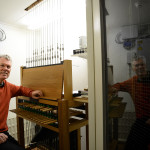 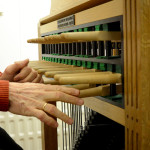 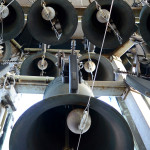 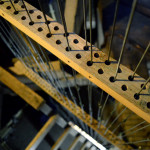 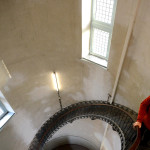 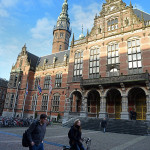 While the contrast of arranging a thoroughly modern pop song for a medieval instrument may seem striking, De Boer says it’s not so strange. In the medieval era, ‘Carilloners were the pop musicians of the city’, he says. ‘They played what they heard in the pubs and cafes, but also in the concert halls and in the church.’

De Boer also performs on Tuesdays in the Martini Tower after his hour-long concert in the Academy Tower. In the church, whose carillon consists of 62 bells, he plays a mix of evergreen songs, classical compositions and twentieth century hits. Some modern music is easier to adapt than others: the melodic songs of The Beatles are pretty simple, but rock numbers by the Rolling Stones or Frank Zappa are a bit trickier.

‘But David Bowie has made some hits that fit the instrument very well’, De Boer says. He had actually already programmed Bowie’s ‘China Girl’ into the hourly repertoire of the RUG carillon over the weekend, but he added ‘Space Oddity’ after the news of Bowie’s death. De Boer says that he was already planning to let the songs play for some weeks in connection to the exhibition at the Groninger Museum, but Bowie’s passing gave the song choices even more urgency this week.