The Dutch football team is not taking part in the UEFA Euro 2016 in France, but it is undeniable in Groningen that the tournament is in full swing. Are all the international students in town as crazy for football as the Dutch? The UK decided to investigate.
By Karlijn ter Horst and Koen Marée / Translation and photos by Traci White

It is 6 p.m. on Tuesday evening. Het Heerenhuis – which has been transformed into the Deutschland Haus during UEFA Euro 2016 – is packed. Waiters are serving currywursts, a band playing schlager favourites is setting an upbeat mood, beer mugs are flying out of the bar and the German students of Groningen are coming together.

Their opponent in this evening’s final group match is Northern Ireland. But it is not Northern Irish students filling the benches and singing songs for their benched hero, Will Grigg. That honour goes to the not-yet-inebriated Dutch fans who are still eager to get in on the action during this summer of football.

‘See, it’s just about being here and enjoying a beer’
Not that it was a terribly tense game for the German fans: reaching the knock out phase was more or less assured. But the mood at the Deutschland Haus was not diminished by that certainty. After blowing one chance after another, the crowd went wild when veteran player Mario Gomez broke away and scored the only goal of the match. The win was celebrated by our Eastern neighbours into the wee hours.

The atmosphere at Drie Gezusters on the Grote Markt is decidedly different on Tuesday. A smattering of Italians bear witness as Ireland scores three goals against their team, which has already secured a spot in the next round. Even though the bar and the terrace are full up, there are no Irish victory songs to be heard.

Two Austrians, Jakob and Christina, are coping with the hangover from their team’s loss to Iceland and the subsequent end of Austria’s run in the tournament. Jakob, an international and European law student (decked out in lederhosen), is disappointed. But heading home with his tail between his legs does not interest him. ‘See, it’s just about being here and enjoying a beer. At least we got to take part.’

No other Austrians were to be seen in the bar – typically Austrian, says Christina, a PhD candidate in microbiology with a flag drawn on her cheek. ‘During these sorts of events, we don’t exactly take to the streets.’ Jakob pipes up: ‘Even here in Groningen, we don’t really seek each other out.’

There is no doubt which team the bar staff at the Groote Griet, the sports café at the Drie Gezusters, is rooting for on Wednesday. They are sporting the Belgian coat of arms on their chests and the words ‘Orange Devil’ on their backs, to the delight of the Belgian fans in attendance.

‘We always support the Dutch, so you guys can return the favour’, says Gilte, a Belgian student of speech-language pathology, in a charming Flemish accent. Watching football surrounded by Dutch people is different from watching it back home, she says. ‘Then, you’re really a part of the crowd and that gets you more hyped up.’


Late in the match against Sweden – in light of the state of the group, the stakes were high – the Red Devils score a goal. Out on the terrace, a handful of supporters jump up and cheer, including a fan decked out as a real Red Devil, complete with light up horns and a pitchfork. When the game is over, a sporting Swede – the only one on the terrace – comes over and congratulates them on their win.

Since the Dutch team is not in the tournament, more Dutch people are getting behind the Belgian players. That also goes for accountancy student Tom who, along with two other friends, dressed up in ‘Orange Devils’ shirts. ‘Even my nickname has been Belgified: from Beerman to Beermanneke’, laughs the Kevin de Bruyne (a Belgian football star) lookalike.

The trio heads out of Chaplin’s Pub on to the Zuiderdiep, which has been christened the Belgium House for the tournament. ‘There was loads of cheering. The music was cranked up whenever Belgium scored.’ And why are they rooting for Belgium? ‘The beer, the accent and the lovely ladies.’

At the end of our tour around the city, it is safe to conclude that the German students are the only ones who come close to going as all out as the Dutch football celebrations do. That is not so surprising, given that the students form the largest international student population in the city – they even recently founded their own student association.

And the Dutch football fans do not seem to be uniting behind any other nation en masse. They do not begrudge anyone their personal festivities, which is clear to see in how the bars hosting them are decorated for the tournament. But the Dutch may very well get more into the spirit of things if the German team ends up being eliminated, a sentiment summed up in the popular expression, ‘Pity, Germany, it’s all over!’ 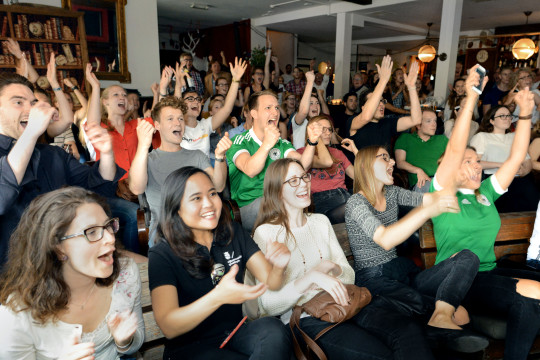 In the Deutschland Haus, the crowd cheers after ‘die Mannschaft’ scores the only goal of the match on Tuesday.