As international students get ready to go home, Stop the Dump is a last chance to get rid of their stuff – but not before saying goodbye.
By Traci White

Students, clad in flip flops and pyjamas, trickle down to the mail room of the Kornoeljestraat flats during the first hour of Stop the Dump on Monday afternoon. Members of the SocialErasmus committee of ESN went door to door upstairs searching for students with belongings to donate.

Meanwhile, Victoria Vitekova, 22, an international relations student from Slovakia, helped out downstairs. She advised students which of the boxes lining the mailroom walls to use, labelled either ‘Kitchen’, ‘Bedroom’, ‘Electric’, ‘Decoration Stuff’ or ‘Other’.

Coming back and forth

Coming back and forth a couple of times, Nathalie Cordeiro, 23, an urban planning bachelor student from Brazil, carries in her kitchen supplies. ‘We used a lot of these to make dinners’, she says, after placing several spatulas and a wine carafe into the boxes. 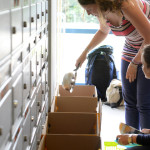 ‘We used a lot of these to make dinners.’

‘There was an Italian guy who used this stuff to make parmesan cheese, and one of my Chinese friends knows how to make really nice cakes.’ As for making meals herself? ‘I don’t cook much, I just eat’, she says, laughing.

Gradually, more students make their way downstairs to drop off their belongings, which will be donated to Mamamini. ‘Students wonder if Mamamini will make a profit off of their stuff, but they are a charitable organisation’, Vitekova says. ‘SocialErasmus is interested in the social impact rather than making a profit.’

ESN also increases the chances that the donated goods will get a second life by encouraging new students to shop at Mamamini during the introduction week. Who knows – maybe one of the sweaters donated by Emma Natalia, a 31-year-old master’s student from Indonesia, will be used by another international student to keep warm next fall.

Natalia carried in two plastic bags, decorated with palm trees, straining under the weight of thick winter sweaters. ‘I didn’t have much warm clothing when I arrived last fall’, she explains, ‘but the winter wasn’t so bad, even though it was the first time I had been around snow.’

Not everyone is eager to part with their stuff. Blanka Szücs, a 23-year-old law student from Hungary, reluctantly places an orange cowboy hat, decorated with rhinestones and feathers, into a ‘decoration’ box.

‘I bought it for King’s Day, which was so great’, she recalls, smiling. ‘I was thinking of wearing it home on the plane, but I’m already going to be wearing my winter coat since it won’t fit in my luggage. I’m just so sad I can’t bring it with me.’

Bigger furniture items can also be donated by contacting socialerasmus@esn-groningen.nl to arrange for transportation.