‘Collect clothes, request a permit and off you go!’

Elfriede Nijboer, a 26-year-old private and criminal law master's student at the RUG, is bringing The Street Store to the Netherlands. On 14 November, the homeless in Groningen can come and pick out warm winter clothes during the event.
By Maaike Vos / Translation by Mina Solanki

The Street Store will take place in the Stadstuin at the Sluiskade (Westerhaven) on 14 November. At 8 a.m., clothes can be brought to this location. Ten bin bags full of clothes have already been collected, but there is still a great shortage of men’s clothing. The organization could also use some tents. Do you want to donate before the event? If so, send an email to streetstoregroningen@
gmail.com.

In Groningen, around 1,500 people are registered at shelters as homeless. Nijboer has seen these people daily on the streets for years. ‘I really wanted to do something for them, but I didn’t know what.’ That changed when she went to do volunteer work in South Africa after completing her bachelor’s degree. That is where the law student encountered The Street Store, a kind of pop-up store where homeless people could pick out free clothes and shoes which had been donated by people in the area. The event has been organized more than 350 times worldwide. ‘I found the idea pretty simple: collect clothes, request a permit and off you go!’ says Nijboer enthusiastically.

The 354th edition of The Street Store will be also be the premiere edition in the Netherlands. Besides clothes, homeless people can also get a free haircut and free food and drinks during the day.

‘The Street Store is very tangible: you can organize it in your own area and you immediately see for whom you are doing it. That appealed to me very much and that is why I wanted to bring it to Groningen’, says Nijboer. Together with more than twenty volunteers, including students and local residents, she went to work without a subsidy but with a lot of good will. She received a complete stationary shop’s worth of paper from The Street Store organization sent to her home. ‘For example, I had to promise that I wanted to make the day a success and that I would do my very best to achieve this, and we are certainly going to do that!’

After the first hurdle had been dealt with, varying homeless institutions in Groningen were approached. They responded enthusiastically and indicated that there was a need for warm winter clothes. ‘There is always a lack of gloves, socks and hats’, says Annemarie van der Vegt, the pastor at the homeless shelter Open Hof. Bregje Kneepkens of Het Kopland, a foundation which provides shelter for the homeless, called The Street Store a ‘very good’ initiative. She says that many of the people who make use of the shelter have very little income and the small amount of money that they do have is mostly spent on warm winter clothes.

Kneepkens especially commends the societal aspect of The Street Store. ‘If I did not have any money for warm clothes, my friends would help me out. However, the homeless are not positioned within society and do not have a network to fall back onto. It is therefore a very positive thing that this problem has been put on the agenda.’

The homeless people are informed by posters that are hung up at the shelters, and some have also handed out flyers themselves. They also gave special cards with a personal invitation to those with a criminal record or who have just become homeless. ‘They might be ashamed, so then it would not be very helpful if we were the ones to invite them’, explains Nijboer. She wants to do everything she can to create a safe environment in the Stadstuin. People are allowed to donate clothes at 8 a.m., but are not allowed to hang around all day. ‘We do not want the homeless to feel as though they are being watched.’

Nijboer finds it very important to organize the event in collaboration with the homeless. ‘Sometimes we come up with things which they do not need. That is why I always ask: ‘What do you find important?’’ She receives many enthusiastic responses from the homeless community. ‘Nobody says: ‘We are not pitiful, we do not need this.’’ They are just happy with the attention and call the initiative ‘heartwarming’. The homeless people that Nijboer speaks to on the streets all say that they will come by the event. But there is still the question as to whether they will actually come. ‘They also say: ‘Maybe I will have forgotten about it by tomorrow.’ If you live one day to the next, it is difficult to remember such a thing’, says Nijboer.

Why would you organize an event for the homeless and not for refugees, for example? Or something cuddly like sad dogs in a rescue shelter? ‘I was shocked when I discovered how many people were registered as homeless in Groningen’, says Nijboer. The more she learnt about the problem, the more distressing the cases she came across became. ‘It is important that people look out for the homeless and care about them.’ Sometimes people tell her that they have given everything they live without to refugees already. ‘That is great, and we certainly encourage that, but we should not forget the homeless.’

The number of people who will actually come is difficult to predict. However, Max, a formerly homeless man who is closely involved with the organization, says that it is not about the numbers. ‘This is the first time that something like this had been organized in the Netherlands; twenty to thirty people would already mean a great success.’ He feels that the attention for the homeless is much more important, and emphasizes that The Street Store is absolutely necessary. The fact that the day has been organized by students really speaks to him, ‘and not in a patronizing way, but more with the goal to making connections.’ Max predicts that it will be an intense day, but with great rewards. ‘Seeing their smile, that is worth millions.’ 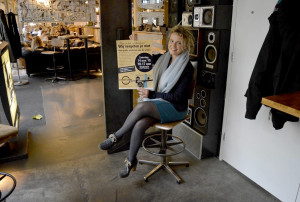 All in the same boat

The French are arrogant