Jang Jin-sung was the court poet for North Korean dictator Kim Jong-il and a member of the North Korean elite until he fled to South Korea in 2004. A Dutch translation of his book about that experience, ‘Dear Leader: My Escape from North Korea’, was published last week. On Tuesday evening, Jang was in Groningen for a lecture organised by Studium Generale and the Centre for East Asian Studies.
By Christien Boomsma / Translation by Traci White 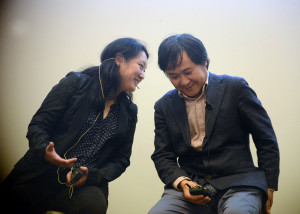 ‘Even doubting is an act of treason in North-Korea’, says Jang Jin-sung. He believed everything he was told for many years, until he met Kim Jong-il in person and his faith began to fail.

Read the interview with Jang Jin-sung.

It was a night that changed his life, the night that Jang Jin-sung got a telephone call at 1 a.m. that Kim Jong-il was asking for him personally. He was placed on a train in the centre of Pyongyang along with important party leaders, and after a journey of two hours via an unnecessary detour, he found himself in a first class station – a station that is reserved especially for members of the Kim family. They boarded a high-speed hovercraft, which also took an excessively circuitous route to its island destination where, after still more hours of waiting, he met The General, who poured him a glass of wine. Such a glass would receive a place of honour among family heirlooms in North Korea forever.

He had a poem, ‘Spring Rests on the Gun Barrel of the Lord’, to thank for the night that changed his life. It made Jang one of the ‘intimate’ acquaintances of Kim Jong-il, which meant that he could not be arrested without the personal approval of the Great Leader. But it also ensured that the myth surrounding Kim Jong-il as a brave, good, honourable leader – which Jang up to that moment had wholly believed – took its first hit.

Because Kim Jong-il didn’t eat just one ball of rice each day, as he intimated to his starving people, but rather dined over a luxurious multiple-course meal with his guests during an evening where even the lighting was adjusted based upon the entrée. He was not the warm, smiling leader that Jang knew from television, but rather a cranky old man who was more interested in his dog than his guests. And that came as a shock.

At this point, Jang was already working in a ‘dangerous’ place: the United Front Department, where South Korea policy was formulated. He was one of the few Koreans who was permitted to read South Korean newspapers in a library to get a feel for South Korea in order to write books and letters which were distributed among the members of the South Korean democratisation movement. They created material that had to look like it originated from South Korea but was, in fact, North Korean propaganda.

It’s a mind-fuck in a system full of them, as evidenced in the book ‘Dear Leader: My Escape from North Korea’ which Jang Jin-sung wrote after his escape from North Korea in 2004. The book describes a country where warm water is an absolute luxury and families are forced to tap water from district heating; where dying of hunger is seen as an offense to the regime; where only the elite have electricity for a couple of hours a day because all public utilities have collapsed because there is no money to maintain them. It’s a country that doesn’t have funding for textbooks and where the ‘writers laureate’ compose poetry because of the lack of paper, and only a handful are permitted to make the long, ‘epic’ poems. That once included Jang. It’s a country where the words ‘in love’ are subversive because a man can only address a woman with the words ‘comrade friend’.

When Jang travelled to the countryside for ‘inspiration’ in the place where he was born, he witnessed the extreme poverty that the people lived in. He realised that the mother of a friend from his youth had been saving a few grains of rice from each meal for months in order to have at least half a serving for a guest, while his bag was full of cognac and snacks – relief supplies from the west. And then something changed.

He began to write personal poetry – a capital offense in a country where everything revolves around loyalty to the Beloved Leader, Comrade Kim Jong-il. At the same time, he dug deeper into trying to find the truth – he had access to secret state archives because he was writing the Chronicles of the Kim dynasty. He read censored, blacked-out passages by holding the paper up to the light and managed to smuggle them out to share with a friend.

And then, that friend – Yongmin – left them behind on the metro, and Jang knew that it would only be a matter of hours before the regime arrested him. He knew that his family would be taken to a camp and that he would have to flee, so he and Yongmin left in a hurry. All that Jang managed to bring with him was his poems.

But that was just the beginning. They headed to China, a nation that wasn’t exactly eager to take in North Korean refugees. The Chinese police pursued them and North Korea framed them as murderers. After weeks of living in fear – Yongmin was arrested and killed himself – Jang came up with a plan to try to sell his story to a South Korean newspaper in exchange for help in getting to the embassy in Beijing.

It’s a moving story. It’s thrilling and toe-curling at once: his story about North Korea is so alienating and laughable yet simultaneously sad, because it’s all real. Kim Jong-il may be dead, but under his son, Kim Jong-un, little has changed. Jang reveals how precious freedom is, but also – and that is the creepiest part – how the cult of leadership surrounding the Kim family has brainwashed an entire nation, and that is why knowledge is of such importance. 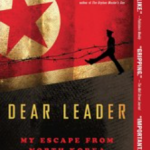 Jang is the editor of New Focus International, an independent news agency that reports on the situation in North Korea. Currently, he is a guest lecturer in Korean Studies at the University of Leiden.