The European Union makes decisions about matters such as the refugee influx, a possible Brexit, and the financial crisis on a daily basis. It is an exciting work environment, but how does one get their foot in the door? That is a job for the Groningen EU ambassadors.
By Renée Moezelaar / Translation by Sarah van Steenderen

During the Brexit meeting several weeks ago, employees at the European Union were working overtime and the constant stream of refugees was cause for concern as well. Not everyone would want to work for the organisation responsible in these times of crisis, but EU ambassador Dwayne van Haasen mainly sees opportunities: ‘An organisation makes her greatest strides in moments of crisis. This makes working at the EU very interesting at this particular point in time.’ 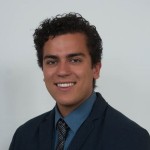 Various ways of getting in

Getting into the European Union means going through an extensive procedure. A lot of students and starters are discouraged by the amount of forms. Van Haasen wants to change this: ‘We will guide you through the procedures and lead you through Brussels’ ivory tower. As long as you know where to be and what to fill in, it’s not so bad.’

The EU ambassadorship in Groningen started a year and a half ago with Margot Recter, who created the basis for its current success. She informed students about the various ways of getting into the EU. For example, there are competitions you can enter to get a permanent position, or you can do a traineeship. During this traineeship, you get a paid position at one of the departments within the European Union, such as the European Parliament or the European Commission. Recter: ‘That year will allow you to figure out if working for a big organisation suits you.’

Recter worked closely together with the RUG’s career service and tried to cultivate as many contacts as possible within the student associations as possible: ‘I mainly set up contacts so the next ambassador could make use of that.’ She did find it difficult to get students from different backgrounds excited. ‘People who studied international relations, for example, are often interested. But the EU needs all kinds of people, including science students.’

‘The EU needs all kinds of people, including science students’
Van Haasen has continued Recter’s work, and he is reaching an ever-growing variety of students by presenting himself at the Beta Business Days, for example. The current ambassador knows that he is becoming well-known in Groningen and that interest in working for the EU is growing. ‘This year, a lot of student associations asked me to give a workshop or presentation. Last year, we still had to actively pursue that.’

Van Haasen also recently organised a large career event with speakers from the European Union, which drew students from different kinds of backgrounds. The attendees were able to take a test that is included in the selection procedure and hear from people who finished a traineeship at the EU. Van Haasen says the afternoon was a rousing success. ‘The event was sold out within a week and we had a huge waiting list. That means my successor has the opportunity to make it even bigger.’

Whether all these people will actually survive the selection procedure and end up with the EU Haasen does not know. ‘As soon as they register, my work is done’, he says. ‘I just try to prepare them as best I can.’ By the way, Dutch people have a slight advantage during the procedure. ‘The EU employs slightly fewer Dutch people than average’, says Recter. ‘So we’re working hard to equalise that and lowering the threshold.’

Van Haasen himself eventually wants to work at the EU as well, and he hopes his ambassadorship can give him that extra little push: ‘I’m very familiar with the procedure, so that might help when I apply.’ Recter dreams of a job at the EU as well, and has taken the first step: ‘I have already registered for a traineeship. Whether or not I get in remains to be seen, but I’ll definitely do my best.’

Too close for comfort