Critical voices about the Israel-Palestine conflict

What’s happening in Israel and Palestine is not a religious conflict, according to insiders. ‘It’s war. It’s ethnic cleansing. Israel is really a terrorist state.’
By Traci White 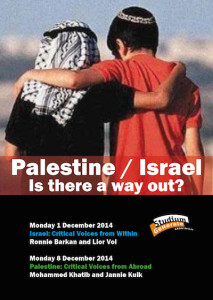 The two-part lecture Palestine / Israel – Is there a way out? will be held at 20:00 in the Academiegebouw on 1 December (Israel) and 8 December (Palestine).

First Ronnie Barkan and Lior Vol, an Israeli conscientious objector and PhD candidate at University of Amsterdam, will speak.

A week later, Mohammed Khatib and Jannie Kuik, senior program officer for Middle East of Pax, a Dutch NGO, will give his views from the Palestinian side.

‘I don’t know what the difference is between Israel and ISIS’, Mohammed Khatib says.

The 23-year-old Palestinian refugee is Skyping from his brick-walled room in Brussels, 20 minutes away from the European Parliament. Although he cannot work due to his asylum status not yet being granted, he’s not waiting around. On 8 December, he will be speaking in Groningen in part two of Palestine/Israel – Critical Voices from Within, hosted by Studium Generale.

He thinks that comparing the Israeli government to ISIS is fitting. The leadership of ISIS calls for Muslims to immigrate: ‘It’s the same way that Israel acts toward their settlers’, Mohammed says.

Elsewhere in Brussels, Israeli activist Ronnie Barkan agrees. He just recently left his home country, but he doesn’t call it Israel. ‘Palestine and Israel are the same place.’

Ronnie, who will be speaking in part one of the series, sees the Zionist world view – the belief that the Jewish ethnicity has a right to a homeland – as inhumane and unsustainable as groups like the KKK.

He was born and raised in Raanana. He realized 17 years ago – two months into his mandatory service in the Israeli military – that Israel was not worth fighting for. Instead, he wants to fight for the rights of Palestinians.

‘I come from a place that is founded on the idea and the practice that the land belongs to one and only one ethnic group’, he explains. ‘That is done by taking away the rights of everyone else, including the indigenous people of the land.’

Mohammed’s family are those indigenous people. His story is that of six million Palestinians: he was born in a refugee camp – Ain el Helwe in Lebanon – as were his parents. But when he was 19, he had to go. He had begun working with the Palestinian Solidarity Centre, a group that promotes workers’ rights, inside the camp.

When the Danish Youth Consulate started working with PSC, Mohammed travelled to Denmark for training. But when he came home after three months, he was not allowed to stay anymore. He tried to move to Syria – before the civil war – but could not stay there. He then moved on to Turkey, travelled from there by sea to Greece, and he was eventually able to reach Belgium, where he has been for the past four years. 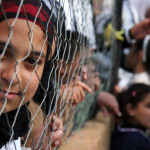 Mohammed: ‘Israel would recognize any Palestinian as a terrorist’

When he speaks in Groningen on the 8th, he wants to tell the audience what it means to be Palestinian. ‘I will try to explain what our situation is now – the whole population. It’s not just in West Bank or Gaza’, Mohammed says. Although little concrete census information is available, the minority of 1.65 Palestinians actually live inside Israel, whereas 4.8 million live in bordering countries and 1.86 million have spread out across the world.

He is critical of the lack of authority in Palestine and would never support Hamas, whose platform is derived from Islam. Not only do Palestinian politicians lack authority in the eyes of Israel, but Israel justifies itself by identifying Hamas as the enemy – and terrorists.

‘On the ground, no one talks of peace.’


‘But Israel would recognize any Palestinian as a terrorist’, he says. ‘Too many people are asking for peace and how we can solve the problem, but on the ground, no one talks of peace.’

Neither Ronnie nor Mohammed think it’s accurate to call it a religious conflict – it’s occupation. ‘It’s not two sides. There is occupation of Palestine, and that is the main problem’, Mohammed says. ‘And we’re not against Judaism. We’re against the Zionism movement.

Ronnie’s own family came to the area following World War II. One of his grandmothers was in Auschwitz, and the tattooed numbers on her arm are a daily reminder of how the Jews were persecuted in Europe. But even with such a direct connection to the Holocaust, Ronnie says that Israel does not get a pass to exist as any form of reparations, and certainly not to go on to persecute the Palestinians.

Zionism, Ronnie says, is founded on inequality. ‘They are supremacists to the core – for them, colonization was not enough.’

Ronnie is 37 now and has been working on BDS – Boycott, Divestment and Sanction – in Israel for ten years. ‘We boycott anyone who is a representative of the criminal apartheid state.’

Citing the downfall of apartheid rule in South Africa, Ronnie feels that boycotting is a powerful tool to enable change in the region. He considers the fact that U.S. Secretary of State John Kerry is willing to refer to Israel as an apartheid state is a sign that things have begun to give way over the past decade. 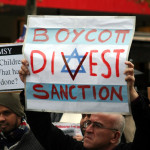 Ronnie: ‘We boycott anyone who is a representative of the criminal apartheid state.’

Ronnie and Mohammed are both in favour of a one-state solution, and they agree about what should be fought for: equality, freedom and justice. ‘Freedom from the occupation of ‘67, justice for refugees to come back home, and equality to transform that apartheid state into an egalitarian state’, Ronnie explains.

And that is what he wants the audience in Groningen to hear: ‘I’m here not to just open people’s eyes, but also to kick them in the ass’, Ronnie says. While Mohammed is not holding his breath for the international community to force Israel to change, he is optimistic that reunification is possible in his lifetime. Ronnie believes it can happen too, and they’re working together to get that message out into the world.