You’d never guess if no one told you, but in the secluded garden of Oude Boteringestraat 23, beneath the shadow of the trees, is a stairway leading to the University’s film archive. It’s also the home of Deep Focus Film Club. 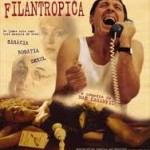 On Monday evening, PhD student Elena Martinescu from Romania is waiting inside. Every week, the Deep Focus Film Club chooses a different ‘national cinema’ and features one of its films. ‘We encourage students from the country whose cinema we are presenting to host the evening’, says Ari Ernesto Purnuma, an Indonesian PhD candidate in Film and co-founder of Deep Focus. This week, it’s all about Romania.

As soon as members start to arrive, it’s clear that this is no in-crowd club. Many students are attending for the first time, like David Shim from Germany. He has worked in the Department of International Relations since September 2013. ‘I’m not here specifically to experience Romanian cinema, or any other cinema for that matter. I’m here for my first film club experience, and all the social enjoyment that comes with that.’

Another attendee, Greek PhD student Dimitris Soudis, works in the Department of Economics and also comes to Deep Focus for the social aspect: ‘But the film side matters, too’, he’s quick to say. ‘I mean, if it were a cricket club, I wouldn’t be here!’ 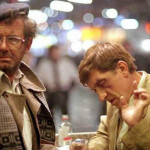 Still from the movie Filantropica (2002)

Dimitris has been here before, but tonight, he has brought along some of his fellow Economics friends, including Cecilia Plottier from Uruguay. ‘The club is not just for “film buffs” and scholars to talk about camera angles and techniques’, she says. ‘It’s for those who enjoy films but may not necessarily understand the film history and theory behind them.’

Julian Hanich, an assistant professor in the Department of Film and co-founder of Deep Focus, agrees. ‘It’s not elitist at all, as film clubs are often perceived. Alternatively, some non-film students enjoy learning about the history and techniques from the film scholars.’

Still from the movie Filantropica (2002)

The screening room is filled with glass cases housing old film rolls, cameras, and other equipment acquired by the Film Department over the years. ‘Luckily, the maximum number of people that attend the club every week is around fifteen to twenty’, Ari laughs. ‘I don’t think we could fit many more in at one time!’

A vote determines that – out of five options – the movie shown tonight will be Filantropica (2002). The film is, on the surface, a comedy, and the archive rings with laughter throughout the screening. Afterwards, the underlying social issues of Romania are explored during a friendly, but lively, debate.

‘We wanted more discussion after the last few screenings, and today we got it’, says Dimistris. The group walks upstairs, back out into the garden and moves on to a café for drinks and continues the discussion past 1 AM. Anjana enjoyed herself. ‘I will definitely be back’, she says. ‘I am travelling back to India over the summer, so perhaps I will bring back some authentic Indian movies to show here’.

While the club is successful, the attendance numbers are still relatively low. ‘We walk a tightrope of keeping a cap on the number of members while also keeping it relatively open’, says Julian. ‘Deep Focus is aimed at anyone interested in film, and we screen films that are currently underrepresented in the cinemas in Groningen; we show films that should be seen’.

More than beer and brats