Embassy for the ‘homo laetificus’

Willem Bos is no stranger to many at the RUG. As a member of the GSb (Groningen Student Union) in his time as a student of medicine, he fought against injustice at the university. Since then, he has left his study behind and in December, he opened the literary café De Graanrepubliek where he continues to fight the good fight.
By Tim Bakker / Translation by Mina Solanki

The past, present and future are inextricably linked with each other. ‘All of the paths taken in the past, even the tragedies, have led to where we are now’, says Bos in De Graanrepubliek.

‘Almost everything you see here was made by people I know’


The café’s name is borrowed from a book of the same name by Frank Westerman. In this book, Westerman describes the 20th century agricultural history of Oldambt. Because of the communist philosophy which (still) prevails there, this region was also called ‘the red triangle’ (de rode Driehoek).

It all comes together in the café. Westerman’s book is in a towering bookcase between Marx and Pikkety, among others. The books are a part of the antiquarian bookshop in the café, De Rode Driehoek, which Bos’ girlfriend Jantien owns. The triangle can also be seen in the café’s logo – if you turn it on its head, that is. ‘This is namely the former warehouse of a Jewish freemason’, explains Bos. 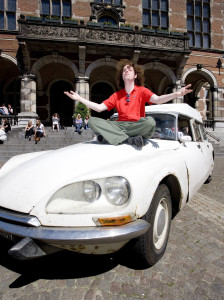 Willem Bos in his student days, sitting on the bonnet of his Citroën DS (photo: UK archive, Jeroen van Kooten)

He restored the building at number 11 Gedempte Kattendiep with his own hands. He took the building, which was in a bad state, under his wing in 2011. It was previously a video store called Sleaze, ‘where you could rent videos you couldn’t find on the internet’, but after its bankruptcy in 2009, the building became a squat house. Bos took over the building from the owner via a rent to own set up. After two years of renovation, the three upper floors had been converted into student houses. ‘As the former portfolio holder for student accommodation for the GSb, I couldn’t have done anything else, don’t you think?’

Transforming the two lower floors into a café took another two years. Once again, Bos took a hands-on approach with a little help from his friends. ‘I am pretty handy, but I can’t do everything myself. But I know a person who’s handy with electrical wiring and another person who can programme. The art on the wall was made by an arts, culture and media (KCM) student. Almost everything you see here has been made by people I know.’

And that is exactly how it should be in an ideal world, according to the newly anointed bar owner; people doing things together that matter to them and that they are knowledgeable about. He mentions the Buurtzorg (neighbourhood home care), which was established by Jos de Blok and is now one of the largest home care organisations in the Netherlands, as an example. ‘He recognised that the management was not really working, so what do you do in that situation? You give the managers a choice: retrain or leave. The caregivers themselves know better than anyone else how they should do their job, so you give them a few extra hours a week to meet up to consult with one another and distribute the work load. That works a lot better, and it’s really a noticeable difference.’

This typifies the flaws of the capitalist system in which we live, says Bos. It forces businesses to strive for a monopoly. ‘The consequence is that the businesses are so large that a top-down structure automatically arises, in which the people at the top of the chain can no longer oversee the choices they make and the people at the bottom do not have a choice because they are considered interchangeable. This causes a sense of distance and alienation between the levels and underutilisation of human capital. This is bad not only for the well being of people, but also for the economy.’

‘Getting to know one another is the goal’


Not that there are only bad people working in the business world, though. Bos believes in the goodness of people, but this is the way the society where we have grown up operates. ‘We have to shape the society in such a way that it is compatible with the way people are meant to fit together, according to science. We have to get back to our natural habitat of small groups. We should not be looking for the homo economicus, but the homo laetificus, in other words.’

This requires learning a new way of living, one which is more intense and restrictive. This puts pressure on relationships, ‘but in this way, you get to know each other on a much deeper and richer level.’ Sometimes this goes wrong, as it did with the GSb, from which he was expelled in 2010 after discord in the union. That’s a shame, Bos says. ‘Especially because it was ultimately about something small. I lost friends there. But I’ve made peace with that course of events now; I have no hard feelings and I’m prepared to offer an olive branch to everyone if they happen to walk in.’

‘Luckily, I had almost achieved everything that I wanted to there, with the exception of finishing medical school.’ He had regular run-ins with the exam committee of medicine whenever he stood up for his classmates. ‘There are still a lot of things going wrong there. Since opening the bar in December, I have already had ten medical students stop by with complaints. Together with a journalism master’s student, I am now researching into the problems going on there and creating a black book of injustices.’

‘Getting to know each other’

In addition to his research and his family, he is especially occupied with the café. Econometrics student Max Marrit, a pre-master student of arts, culture and media – the same student who made the artwork for the wall – and Lester, who just started as a geography teacher, help with the café. De Graanrepubliek should become a place where people from various orientations come together. It’s a sort of clubhouse for the academic community and a test ground for an alternative economy. ‘The couchsurf community comes here every month and Flanor [a literary group, ed.] can also be found there. There is a conservatory teacher who plays here regularly with an ever-changing jazz ensemble. And I am in discussions with quite a few other associations.’ 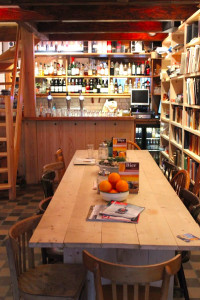 ‘Getting to know one another is the goal, bringing people together and just getting them to talk to each other.’ In order to facilitate this, the ground-floor space does not have many small tables, but just one long table. And it is a success, says Bos. ‘It always leads to different groups getting into discussions with each other.’

‘It’s continuing to improve. I think that it is the only bar in Groningen which generated more revenue in February than it did in December, but I hope that that changes next year’, he says with a laugh. ‘The bar has to become self-sufficient; I want to continue with it.’

And in the future?

‘Setting up more businesses, and ultimately creating the antithesis of capitalism based on the ideas of Marx and Piketty.’