‘Every parent in Groningen should know who we are’

They have only been seriously at it for three months, yet Liselotte van der Lugt and Justine Doeksen already employ approximately 100 girls. With Toppas, the students want to offer more than just a babysitting service. ‘Parents can have someone come over early to do the ironing, for example.’
By Koen Marée / Translation by Sarah van Steenderen

That they have experience babysitting is obvious. ‘I was already babysitting when I was still a teenager living with my parents’, says Van der Lugt. ‘In Groningen, four of us babysat two children. We would decide among ourselves who would go. The parents were guaranteed that someone would come, and they also had friends who were interested in this kind of set up.’ And Doeksen? Thanks to three younger sisters, she learned the art of babysitting at a young age.

They got the ball rolling. As luck would have it, the Groningen afterschool day care was completely filled up on Mondays and Thursdays. This reinforced their idea to start a company. ‘We really got it going in the summer. We made a website and we came up with the concept. On 29 September, we registered at the Chamber of Commerce’, Doeksen explains enthusiastically.

By ‘the concept’, the students are referring to their pool of babysitters. Three girls are assigned to each address. ‘Parents like it when they see a familiar face. After all, they are entrusting them with their children’, says Van der Lugt. ‘We pre-select the girls. They have to be introduced by any one of the girls already working for us. If we don’t know them yet, we will have a short interview and maybe a personal meeting.’

‘We were surprised this concept did not yet exist in Groningen’
For the babysitters, it is not just a matter of putting the children to bed and zoning out on the couch. There is work to be done. Doeksen: ‘Parents can have someone come over early to do the ironing, for example. Or the babysitter accompanies the child to swimming lessons.’ Due to this, the prices are slightly higher than those of the average baby sitter you may find via a notice board.

‘The parents who use our service gladly pay a little more for the guarantee of a babysitter showing up. We’re very flexible. In the exceptional case where all three girls can’t make it, we have back-up babysitters. And like I said, they also do chores. We were surprised that this concept didn’t exist yet in Groningen. There certainly is a market. Parents and babysitters don’t always know where to find each other’, opines Van der Lugt.

The communication science student gets a kick out of expanding Toppas. ‘The more I work on it, the happier it makes me. That’s because of all the reactions from parents and friends.’ The pair will stick to Groningen for now: ‘We want to make sure we’re one hundred percent organised here first. Our primary goal is for every parent in Groningen to know who we are’, they say, full of ambition.

‘Right now, we’re spending at least a few hours on the company every day. We distribute flyers at schools, send emails, make phone calls. We feel it’s important to have a lot of personalised contact with the parents,’ Doeksen says. ‘I’m starting my master’s degree in February, so it will be quite busy. But after the start-up stage, it will probably quiet down’, Van der Lugt says.

They sometimes even have time for a drink, for instance at Vindicat, the student association which part of their network is connected to as well. ‘But half of them come from outside the association. Imagine there’s a large party that everyone is attending – that would mean no one is available to babysit’, Van der Lugt jokes. Doeksen continues: ‘What if no one is available? That would be a very exceptional situation. Reliability and flexibility are our key priorities. But Liselotte and I have agreed that we’d be the first to skip the party.’ 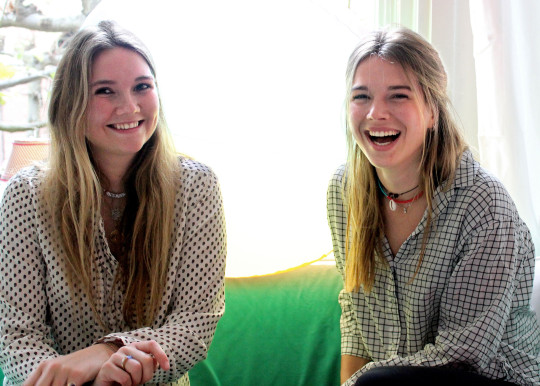