Five years ago, Addis Tesfa (40) left Ethiopia as a political refugee. He ended up in the Netherlands by way of Kenya. Now, he studies International Financial Management at the RUG. He lives in Buitenpost with his wife and three children.
By Beppie van der Sluis / Translation by Sarah van Steenderen

‘I had to leave the country in 48 hours or be faced with two options: go to prison for at least twenty years, or be murdered.’

In 2007, Tesfa starts his own newspaper in Ethiopia: the Goggle. He does this because he is dissatisfied with the biased journalism he feels is happening in his country. The government is fiercely opposed to the newspaper. The articles Tesfa writes often contain blunt opinions on the way the government of the country operates. And the government is not happy with this. ‘Ethiopia is an emerging country. It’s an interesting country to visit for foreigners. But the same is not true for the people who live here. There is no freedom of speech and no proper justice system’, he says.

Three years later, in 2010, the African country is holding elections. On the eve of the campaigns, Tesfa receives a call from the minister of information. He wants to collaborate with his newspaper. Tesfa says: ‘The minister was a good man. I believed that he meant well, which is why I agreed with his proposal.’ A lot changes after this phone call.

The minister tells Tesfa that he has to do what the government asks him to do. If he doesn’t, he has to stop with his work at the newspaper. ‘I told him that I would continue to write what I wanted, whether he liked it or not. The government wanted to turn the Goggle into a propaganda machine. I refused to let them do that.’ 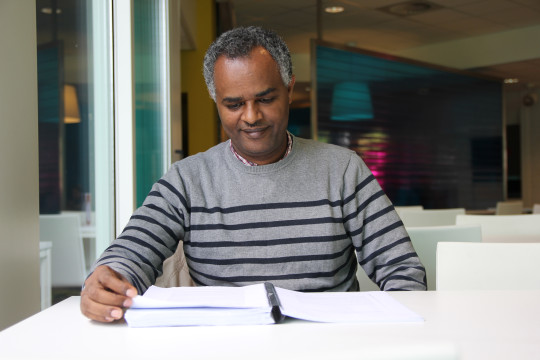 Because Tesfa refused to cooperate, he has been arrested several times and beaten by the police. ‘Once I was hit so hard in the head that I now have permanent brain damage. This means that I sometimes mix up words.’ He points to the spot on the side of his head. Tesfa is no longer safe in his own country. Yet he is not afraid. ‘They told me in no uncertain terms that if I were to stay, I would be arrested or murdered. I wasn’t very impressed, but I had to leave to protect my family. If I were to die, they wouldn’t be safe anymore, either.’

He decides to flee on 6 August, 2010. A friend manages to secretly procure him a plane ticket and gets him a hundred dollars in cash. ‘The government had blocked my bank account. I couldn’t pay for a ticket myself.’ He left for Kenya in the dark of night. ‘Everything was dark. I was leaving behind my family, my mother, my brothers and sisters. I don’t like to think back on it.’

After his arrival in Nairobi, Tesfa stays in a hotel for three days until the money runs out. In his room, he writes letters to organisations who might help him. His stay at the hotel is anything but relaxed. ‘I was scared. Ethiopia’s secret service had sent a delegation to Kenya to find me.’

After two days, Tesfa meets another person from Ethiopia that has fled to Kenya. ‘I recognised my countryman on the street, from the way he looked. I approached him and told him my story.’ This meeting turns out to be what saves him. The Ethiopian man shelters Tesfa in his house for a month and protects him from the secret service. He helps him find a house, which enables his wife and children to fly to Kenya. Funds from different organisations help Tesfa support his family.

On 14 September, 2011, Tesfa and his family fly to Europe. After applying to the United Nations, they are invited to come live in the Netherlands – in Buitenpost. ‘Everything had been arranged when we arrived: a house, a school for the children. I was so grateful, and felt encouraged to resume my life. The people in the village helped us with everything, and I am very grateful to them.’ Nevertheless, Tesfa finds it hard to make a completely new start. ‘I had everything in Ethiopia. I had a house, I drove a car, I had a good job. In the Netherlands, I had nothing. It was frustrating.’

In the Netherlands, he gets the chance to go to school. First, he gets his pre-master in Economics & Business. Then, he transfers to the master International Financial Management. Everything is going very well. Yet the way of studying in the Netherlands takes some getting used to. ‘In Ethiopia, everything was more theoretical. Here, school is much more practical and I have to do many presentations. I wasn’t used to public speaking, it’s not very common in my country. But I did it, and I’m very proud of that.’

In the future, Tesfa would not like to return to his country. ‘Everything I have is in the Netherlands. My family, my school. I hope the political situation in Ethiopia improves. There are many large organisations and companies. In the future, I would like to be the link between Europe and Africa in my area of expertise.’ He hopes to finish his master this year.

In a rubber dinghy to Europe