When Lianne Jansen studied friendship formation in the international mathematics bachelor programme, she discovered that students often clicked regardless of nationality, gender or even their grades.
By Valia Papadopoulou

It turns out that friendship formation among university students is a topic that had never been researched in the past, so Jansen, a 25-year-old master’s student in mathematics, followed her supervisor’s advice and looked into it. 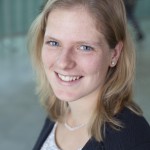 The students in the English-taught international mathematics degree became her guinea pigs. The programme launched in 2013 as one of several English-taught tracks, and 60 of its first year students took part in Jansen’s study by filling in a questionnaire three times throughout the academic year.

Jansen examined both friendship formation and academic performance of students in this deliberately international environment. All of the students mix quite well, Jansen says. ‘I noticed that international students tend to become friends with Dutch students more often than with other internationals,’ she says. ‘That was remarkable to see.’

She was also surprised to discover that students’ different educational backgrounds seemed to have no effect on academic performance at the university. ‘In high schools, you usually find two types of clusters: students with high grades and students with low grades. That wasn’t the case in my research,’ Jansen says.

While the social atmosphere of the programme seems to suit the students now, internationals initially found it difficult to integrate when the transition to English began. Since the majority of the students were Dutch, they would mainly speak their native language during the breaks and sometimes ask questions in Dutch during the lectures, making international students feel a bit left out.

‘Students have gotten used to speaking English’
Patrick Onck, chairperson of the international steering committee at the Faculty of Mathematics and Natural Sciences, says it was fairly easy for academics to get used to teaching in a foreign language since so much literature is written in English. ‘But it is sometimes more convenient for them to use their native language if they are explaining a complex concept for example,’ he concedes.

‘There were indeed communication problems in the beginning,’ Fiorella Brustolin, policy advisor for international relations at the FMNS, admits. ‘After making that known to the teachers, they started replying to the Dutch students solely in English during the lectures, even if the question was in Dutch. These type of problems are solved now and students have gotten used to speaking English.’ She also believes that efforts from study associations in the faculty to host activities that appeal to international and Dutch students alike have helped create a more inclusive environment

The students who took part in Jansen’s research were favourable about the changes so far, too. ‘Both international and Dutch students were positive towards the international bachelor programme and they all responded that doing everything in English is not a problem,’ Jansen explains.

So far, there are 10 English-taught bachelor programmes across the Zernike campus, and Onck and Brustolin both confirm the department is planning to launch more in the future. ‘The transition to the international classroom has just begun,’ Onck says.