With a sailboat they renovated themselves, RUG student Tjerk Zweers and Hanze University of Applied Sciences student Niels Tammeling will begin their voyage around the world. During the trip, the duo will help charities such as Floating Doctors and the Plastic Soup Foundation. And they are doing it all as sustainably as possible.
By Koen Marée / Translation by Sarah van Steenderen

Medical student Tjerk Zweers (25) is in a good mood as he disembarks at the Reitdiep harbour. After a quick greeting, he immediately points to the solar panels: ‘We reattached those this week!’ This Saturday, the first proper day of spring, they are generating quite a bit of energy. Inside is Hanze student Niels Tammeling (27) with Lorenzo the miniature parrot on his shoulder, who is immediately intrigued by the newly arrived company.

‘We wonder what we’ve gotten ourselves into sometimes’
Zweers and Tammeling’s lives revolve almost exclusively around the sailing ship. The plans to one day travel around the world took root in 2008. ‘Niels was living in Curaçao at the time and would see all these old people sailing into the harbour. We met at sailing school and immediately thought: ‘Why wait until we’re old?’ That same day, we set up a savings account to eventually buy a boat.’

In 2012, it was time. With a little help from dear old dad, the duo bought a Trintella named La Reina. ‘We sailed over here in November and started living on the ship’, says Zweers. ‘We wonder what we’ve gotten ourselves into sometimes’, Tammeling laughs. ‘Especially when, a week in, the heating broke and the frost set in.’ After quite a bit of work fixing it up, the boat was ready to leave in 2013. 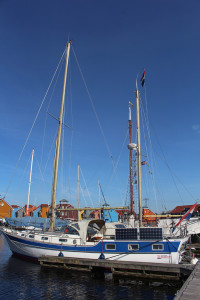 Yet they did not immediately cast off. Tammeling, inspired by his studies in mechanical engineering, thought a sustainable boat might be a good idea. ‘Wouldn’t it be great to not have to depend on diesel or gas? I started doing calculations to see if it could be done differently. The outside world criticised us and said we were only in it for the money, but we just think it would be fantastic to sail around the world this way.’

‘The project did get a little bit out of hand’, Tammeling says, grinning. For Zweers, it was a lot of extra work in addition to his medical studies: ‘You have to become an expert on so many things, because we don’t have the money to have someone else do it. My lowest point was when I connected the water pump the wrong way around, and the valve sucked air into the water tank.’ Tammeling is grinning again: ‘There are advantages, too. Friends ask for tips a lot, about the solar panels for example. Apparently we serve as an example to others.’

On their journey, the ship will join up with several projects under the name ‘Trintella 4 Green‘. ‘We’re starting out with IVN and the Plastic Soup Foundation. We’ll be dragging a plankton net behind our boat so we can fish plastic out of the ocean. For the Foundation, we’ll map out where we catch the plastic, and IVN will use it to teach children about pollution. In 2018, there will be approximately 220 schools involved in the project. We’ll even be talking to a few of them on Skype’, says Tammeling.

‘As a doctor, I can provide basic care’
Next, they’ll be helping out Floating Doctors. ‘They sail to traditionally inaccessible places where there often is no doctor on call. Tjeerd, as a doctor, can do so much good there.’ Zweers adds: ‘We want to collect or buy basic medication and donate it over there. As a doctor, I can provide basic care. Niels wants to work as a volunteer and could for instance transport people who are ill to a place where there is a doctor or a hospital.’ And finally there is Greenpeace, for whom the duo wants at the very least to do a photo reportage about fishing installations around the Great Barrier Reef. ‘That way, people know what’s going on there. The ocean is being fished empty.’ 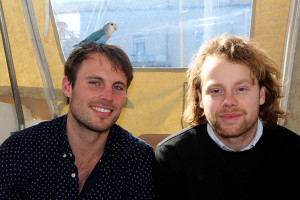 Tjerk Zweers (left), Lorenzo the parrot, and Niels Tammeling will be travelling for at least three years.

The journey will take at least three years. ‘We’re only sailing at ten kilometres an hour, so we can’t go much faster’, says Tammeling. The pair is not worried that they will get sick of each other. Zweers: ‘We live together here and run a sailing school from the boat. And at sea, one person sails while the other sleeps. So you’re basically travelling alone, and you’re only awake at the same time when you’re in harbour.’

‘We sometimes speculate about how long we’d be able to stay at sea without landing’, says Zweers. ‘We’ve got solar panels, collect rain water, and we’ve got two fishing rods.’ Tammeling: ‘When you make use of all the weather influences to generate energy, that’s all you need. These are things that make the journey very interesting. We’ll be leaving in almost a year, and we’re so proud that we’ve made it to this point.’