Funny Follies in English and ‘Gronings’

They began serving as reluctant soldiers in World War One, but became famous theatre performers. One hundred years later, the ‘Timbertown Follies’ are back.
By Traci White

They weren’t supposed to be in the Netherlands at all, the 1,500 sailors of the British Naval Brigade who crossed the Dutch border after the fall of Antwerp in 1914. The Netherlands were neutral in World War One, and the retreating troops were sent to Groningen where they had to be interned.

They were held in a sprawling complex of wooden buildings which quickly became known as HMS Timbertown, on the grounds of the modern-day Van Mesdag Clinic on the Hereweg. One of the sailors, Fred Penley, was the son of a famous British Victorian actor and created the ‘Timbertown Follies’, a cabaret-style musical hall show. Nearly a dozen of his fellow troops joined the cast to stave off boredom in the barracks, and their comedic performances soon grew wildly popular within the camp and across the Netherlands.

One hundred years on from their heyday, the Follies are back. Stichting Peerd, a Groningen-language theatre group, and Stranger Things Have Happened, the English-language theatre and improv group, bring them back to life in a unique bilingual performance: the sailor characters all speak English, whereas the Dutch characters in the play speak the Gronings dialect. 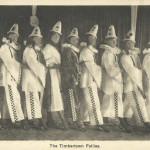 TJ da Silva, a 25-year-old Arts, Culture and Media master’s student at the RUG and member of Stranger Things, worked together with director Theo de Groot from Stichting Peerd to create the script. Da Silva is happy to carry on the tradition of performing English-language comedy in Groningen: ‘It feels kind of weird, but it’s also inspiring to know that a hundred years ago, the Follies really laid down the foundation for what we’re doing now.’

Many of the sketches, songs and characters from the original Follies have been revived in the modern show. Much of the music is performed live and the actors also use props on stage to recreate the sounds of the guns on the battlefield in Belgium and the hissing brakes of their train pulling into the Centraal Station in Groningen.

The Follies became well-known and beloved far beyond Groningen. After performing at the Groningen Stadsschouwburg, they followed it with a national tour: the sailors-turned-actors put on shows in Amsterdam, The Hague, Haarlem and Rotterdam in 1917.

‘The war was their luck’ 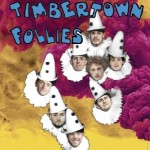 ‘Timbertown Follies’ will have six performances at Der Aa Theatre on 25 and 26 September, and 1, 2, and 3 October at 20:30. Tickets are €12.50 for students and are available at the website of Stranger Things Have Happened.

As their fame grew and their lifestyle became more charmed, the knowledge that thousands of men just like them were dying on the battlefields across the border left the actors with a strong sense of guilt. ‘They felt very ashamed about their privilege’, De Groot says. ‘The World War was their luck, which is a strange idea.’

When the war ended and the men returned home, they could rarely bring themselves to give an honest answer to the question, ‘What did you do in the war?’ One of the former Follies members burnt all of his memorabilia from the show 60 years later.

The modern Follies hopes to show the faces behind the smiling masks and how the citizens of Groningen felt about these English soldiers in their city. Above all else, their goal is the same as the original Follies: to make ‘em laugh.

Editor’s note: According to family of members of the original Follies, some details that the stage production took from the Leo van Maaren documentary, ‘The Timbertown Follies’, were inaccurately represented in the play.

Let Us Entertain You