Going for the gold with rubber

In America alone, 300 million rubber tires are thrown out as waste every year. But what if they could be reused? RUG PhD candidate Laurens Polgar came up with a solution, which he presented in Berlin on Sunday.
By Jeanine Bronsema / Translation by Sarah van Steenderen

Falling Walls is an annual conference in Berlin where scientists from many different areas of expertise present their ideas for groundbreaking science. The event – organised annually on the anniversary of the fall of the Berlin Wall – wants to put companies, the media, and the general public in touch with science. Falling Walls is a platform where young scientists can pitch their ideas for possible scientific breakthroughs in three minutes.

Car tires, shoe soles, cable casing: rubber is everywhere. But it is a shame that the millions of kilos of this black stuff cannot be recycled and are therefore causing an enormous environmental problem.

‘The moment rubber comes out of a tree, it’s a viscous fluid’, says PhD candidate in product technology, Laurens Polgar. ‘In this fluid, long rubber polymer chains, or long chains of rubber molecules, are floating past each other.’

In order to turn this into rubber as we know it, a kind of crosslink is added to it. ‘This creates a network which stops the rubber from flowing’, Polgar explains.

But these connections – crucial for the process of making usable rubber – form a problem upon reuse. This is because the material has to be made liquid again so it can be moulded into another shape. This destroys the network of crosslinks, and the rubber itself is destroyed with it.

In order to find a solution, Polgar went back to basics. He wanted to create rubber that is recyclable in and of itself. And he succeeded. ‘This new rubber contains crosslinks that can be destroyed without destroying the rubber itself.’

To do this, he used a different type of polymer which is known to have crosslinks that can be repaired once they have been broken. He then put those into the rubber. Then, there was the challenge of making sure that this new type of rubber would behave like the old one. ‘I’ve had to make quite a few adjustments, but I did ultimately succeed’, he says.

Now the industry just has to take the rubber into production. But Polgar believes it is possible. The new polymers are not much more expensive. Moreover, the total costs will be lower because the product can be reused for longer. Polgar expects, therefore, that products made from this new type of rubber will be available within five years.

Although Polgar’s background is in chemistry, he does not spend all his time doing experiments in a fume hood. ‘I also do hands-on research’, says Polgar. ‘I can really feel the results of my experiments.’

Polgar also thinks it is important to publicise his profession. ‘I think you should show what you’re working on to a wider audience.’

After all, they are the ones who have to actually use the products. This was the main reason for Polgar to participate in Falling Walls Lab Groningen, where young scientists can present their ideas. ‘I didn’t really go with the intention of winning’, Polgar laughs. ‘So when I did, it was a nice surprise.’

Now, he has represented the Benelux in the final round in Berlin. ‘That does sound pretty cool, doesn’t it?’ Polgar beams.

This time, he was going for the gold, and so he has practised his presentation better than last time. ‘I think I should probably just bring a piece of recyclable rubber and show them that it’s already possible.’ It wasn’t enough: the first prize was awarded to Sabrina Badir from Switzerland, who wants to make pregnancies safer with a newly developed device. 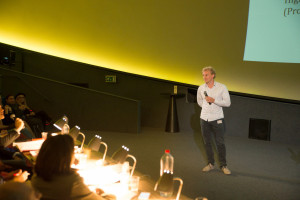 Laurens Polgar presents his solution for the recycling of rubber.