‘Head over there and have a beer’

This week, Groningen is temporarily the pop capital of the world. Were you unable to get a ticket for Eurosonic Noorderslag? You can always go to Grunnsonic: it's completely free and completely Gronings.
By Emma van der Zalm / Translation by Sarah van Steenderen

This year, during the 30th edition of Eurosonic Noorderslag (ESNS), the focus is mainly on Eastern European artists. Grunnsonic, however, is all about Groningen-based musicians. This free spin-off of ESNS is organised by POPGroningen, will be held at seven locations and will include performances by 42 acts.

‘If they’re from Groningen, they’re welcome’, says Grunnsonic project leader Frank de Boer. ‘But it should be pop music. There are no shanty choirs or anything like that.’ In addition to being Groningen-based, the bands should be good. ‘The bands here have proven themselves before. They’ve either gone on tour, made an album, or are signed with a label’, says De Boer. ‘The quality of the music is most important.’

‘Sometimes we get into a trance, and then it’s like releasing a kennel of puppies’
‘The more a band performs, the better they get,’ the project leader says. Through Grunnsonic, POPgroningen wants to help artists in their development. ‘You have to provide upcoming bands with a fertile breeding ground so that they can grow bigger. Obviously, we would love it if the next band to make it big is from Groningen’, De Boer says.

According to Rutger Smit, manager for the band Vikings in Tibet, becoming the next big thing in Groningen is quite easy. But a bigger breakthrough is much harder. Eurosonic and Grunnsonic can help with this, Smit believes. Every year, 3,000 to 4,000 visitors from all over Europe come to the city to attend the music festival. De Boer thinks there is no way to make it any easier for bands who are just starting out. 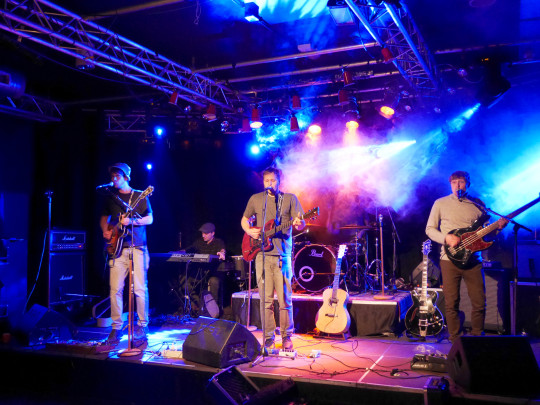 Vikings in Tibet will be playing at both Eurosonic and Grunnsonic this week.

In 2015, Vikings in Tibet won the POPgroningen Talent Award. Because of this, they have their own show at ESNS. The band is also playing at Grunnsonic. ‘It’s going to be a really great week’, says guitarist Joe Wilcox who, just like the rest of the band, looks forward to Grunnsonic every year. ‘People really come to see the bands’, says singer and guitarist Jeppe Gooskens. ‘That is a great audience.’

If you are more into action, the band And the gods made coffee might be interesting to you. ‘They always go all out during their performances’, says De Boer. ‘They even break stuff sometimes.’ Whether that will happen during Grunnsonic, the band can’t say. ‘We’d rather not break anything, because that’s expensive’, says drummer Tim Lechner. ‘But sometimes, we get into a trance, and then it’s like releasing a kennel of puppies.’

Are you still clueless about which bands to see at Grunnsonic? De Boer recommends listening to the 3voor12 Grunnsonic playlist. ‘Find something you like? Head over there and have a beer!’