A fraudulent landlord promised Natalia from Poland housing at Oosterstraat 23. She payed €950 for a room that doesn't exist. The police can't do anything.
By Verena Rendell

It all seemed to be going so smoothly. Natalia (23), a Master’s student of Business Administration, was searching on Facebook for a room in Groningen. It wasn’t easy and she cannot even recall which groups she used during her quest.

Then she stumbled across a short, simple room offer in Oosterstraat 23. ‘I was so relieved that someone had replied to my messages!’

She asked the Facebook contact, Doro Atkin, for more details, but was immediately given an email address to contact. Natalia and her landlord, who called himself Christian Alexander Schröder, chatted via Skype. 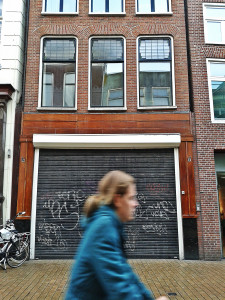 The house at Oosterstraat 23, Groningen

One day after their initial contact, Natalia signed the contract and transferred €950 to a bank account in the United Kingdom. That was a big mistake. ‘Up until then I’d only had good experiences with renting rooms. This had never happened to me before. I was so sure that nothing bad would happen.’

Natalia went to the Polish police immediately. Only after arriving in Groningen in September, she discovered she was not the only victim of Oosterstraat 23. ‘We had already registered one report with the Groningen police about the Oosterstraat fraud’, says student officer Matthijs Beukema from Groningen.

However, the different nationalities involved – a German landlord, a British bank account, an international student and a Dutch property – made it extremely hard to prosecute the offender. ‘We even started a short investigation, but we didn’t have the resources to follow up on a foreign bank account.’

Like Natalia, Andrea Caruso (24) and Martina Carruba (21), both from Italy, saw the same room offer. They also got in contact with Atkin and later Schröder. Fortunately, both became suspicious when the supposed landlord was neither willing to Skype by voice, nor let their friends see the apartment, nor hand over the keys before the money was transferred. Both immediately ended contact with the fraudsters.

More students have been in contact with Atkin and Schröder, but exactly how many international students fell victim to them is unclear. Like Natalia, who reported the fraud in her home country but not in the Netherlands, other students may have also reported the fraud back home.

The mother of the supposed landlord was completely taken by surprise when she learned of the accusations. ‘This cannot be true; it must be a mix-up with another Christian Schröder because my son is studying in Los Angeles.’ So it is also possible this identity is fake too.

A copy of the ID card that was sent to the victims, together with the signed contract, indeed confirmed that her son’s name was involved. ‘I don’t know anything about it. My son hasn’t told me anything.’

Nevertheless, the fraudsters are still active. The fake Facebook profile is still posting room offers. While ‘Doro Atkin’ posted room offers in early July, a profile named ‘Etta M Arhy’ posted room offers only a few days ago. The same wording of messages, the same profile picture and the sheer quantity of room offers in groups such as ‘Wohnungen, WGs & Zimmer in Groningen’ suggest that these profiles are linked.

Natalia regrets that she didn’t pay closer attention to the hints. ‘It’s stupid what I did, but when you are so desperate to find a room, you don’t think clearly.’ After the transfer the landlord no longer responded either to her emails or Skype calls. Likewise, Atkin blocked her on Facebook. ‘By then, though, it was already too late.’