‘I quickly became the ‘Merch Girl”

From ‘packing up a box and posting it’ to ‘merchandiser and label manager’. That Rowena van der Zouwen still manages to study movement sciences is almost a miracle. She holds her own as the only female at hip hop label Bankpioniers, which has contracts with rappers such as Kraantje Pappie and FATA.
By Koen Marée / Translation by Mina Solanki

It is a busy period at Bankpioniers (‘Bench pioneers’ in English). Clips are being thrown online, Banktape 1.0 will be released and a jam-packed 2016 is also knocking on the door. However, for 24-year-old Rowena van der Zouwen, it is all pretty easy to handle. This is thanks in part to her colleagues, but also her relaxed attitude. ‘I’ve never had the feeling that it was real work.’

It is her brother’s fault that she works about 24 hours a week. Alex van der Zouwen, better known as Kraantje Pappie, asked her in 2013 if she could send packages with merchandise every now and then. ‘That was only 100 hats, it was the first merchandise. But it went pretty quick.’

That was also the year that Bankpioniers was launched. ‘FATA, three guys from Deventer, wanted to make a record and Alex already had plans to start a label, so his plans were sped up. He started the company together with Steven Campbell and Nick Steenge. The name ‘Bankpioniers’ refers to a bench (‘bank’ in Dutch) behind the Brink in Zuidlaren, where we are from.’

‘You should not want to make music to make money’
By the time Kraantje Pappie’s second album, Crane II, was released, the 100 hats had grown to thousands of products. ‘That’s when I took it more into my own hands, such as the contact with customers. I also went along on tour as much as possible. Alex has done a club tour twice and as I was always selling merchandise there, I quickly got the nickname ‘Merch Girl’. There were always parties that lasted all weekend. I went along as the only girl, but you get used to it.’

Back to the lecture hall

She went from touring back to the lecture hall. Quitting or switching to a music management programme was not an option, despite her passion for the music world. ‘I must not forget what I was planning to do. I actually wanted to study medicine, but I wasn’t selected, three times. The human body really intrigues me. I definitely want to finish my movement sciences bachelor; I am already in my third year.’

And then? ‘I would rather not think about it. There comes a time that you have to choose. Forensic psychology is a dream, but Bankpioniers is also becoming a dream. It’s a good feeling to have a share in working on somebody’s career. Our key principle is that you should not want to make music to make money. We just want to do fun things and we do not want to instruct the artists on our label. They have to remain true to themselves.’ 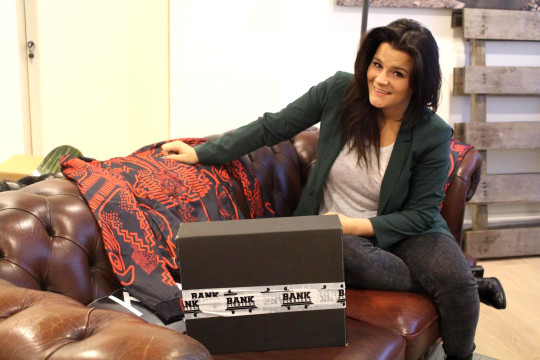 ‘I have also been the label manager since July of this year. In addition to the merchandise and social media, I actually run the label. Alex works with the artists in the studio, but once the product is finished, it comes to me. Cataloging music, creating release strategies, collecting contacts, planning interviews… I could go on. This week I have to make sure that all the artists make an announcement about Banktape 1.0 at the same time, for example. In principle, that is not so difficult, but we are talking about hip hop artists here.’

Van der Zouwen learns a lot by doing, but in January she will also follow a number of seminars during Eurosonic/Noorderslag. ‘I have booked a conference ticket for the first time ever. There will be things I already know but also many things I do not know yet. Bankpioniers will also host its own private after party, where everyone is allowed to get drunk without being caught out. I think I have my last exam in the morning on Thursday the 15th, so afterwards I can go straight to the events and seminars. It is already a great week, excluding the exams of course.’

In July 2016, Kraantje Pappie’s third album – Crane III – is scheduled to drop. The merchandise is already being dreamt up ‘Yes, it is busy. On Thursday last week, I sat here from ten o’clock in the morning to 11 o’clock at night, because our web shop sale began on Friday. During exam periods, however, I can just decide not to come in for a week. It is very convenient that I can combine studying and Bankpioniers.’