Internationals struggled after the Dutch government demanded they work 56 hours a month to get financial aid. Others had to return home.
By Anna-Lena Sachs

Too bad for 23-year-old Tabea Heisenberg. She was in her third year of American Studies at the RUG when she realized she wasn’t going to get more hours as a dishwasher. But she needed 56 hours from the beginning of 2014, whereas 32 had previously been enough. Consequently, she was not eligible for study financing anymore and her monthly budget was cut by 410 euros.

She realized that she could not continue studying in Groningen after she finished her bachelor. ‘I was not able to find another job in the Netherlands, even though my Dutch is pretty decent.’ Moreover, she was uncertain if she could handle 56 hours a month without neglecting her study. Tabea struggled financially through her final semester while using up her savings and left Groningen in July. 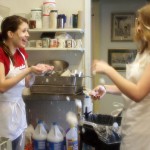 Tabea Heisenberg couldn’t get more hours working as a dishwasher


She is not the only one who has been struggling with the new rules. Although Sean Beech, an American Studies student, and Adam Źródłowski, an International Relations and International Organizations student, were able to extend their hours to 56 a month, they are facing similar problems.

Adam, who came to Groningen from Poland, works as a delivery boy at a restaurant and has an agreement with his boss that he has to fill the 56 hours a month, but this comes at a price: ‘My boss calls me often without an earlier notice and tells me that I need to come urgently to work.’

In order to protect the agreement and his job, he is willing to take the extra shifts and the difficulties that come with it. Consequently, Adam works five hour shifts up to four times a week at the restaurant, in addition to studying full-time. ‘This certainly complicates my life, but I always tell myself that my situation is temporary and that there are better days ahead.’ 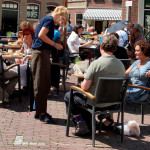 Some internationals have to work at irregular hours

Sean, who is working at a car dealership in Arnhem, struggled to find a job in Groningen and had to look for other employment offers in different cities. Although the two hour train ride to Arnhem takes up a lot of time during the week, Sean depends on this job, since his employer is willing to provide him with 56 working hours. Nevertheless, he is disappointed because he came to Groningen from the United Kingdom in order to study, ‘not to work excessively.’

Since Sean is a full-time student at the RUG, he finds himself not spending as much time as he would like on his bachelor, which can have an effect on his grades and thus his future career.

Tabea is frustrated and feels her life has been turned upside down. She expected DUO to handle the situation differently: ‘They could have announced the change earlier, so that internationals and their employers could adapt to the circumstances.’ A head start would have given students the time to look for another job. Additionally, the employers also could have arranged a different work schedule ahead of time.

The reason they gave for the change was also unsatisfying, Tabea says. ‘They changed it in order to protect themselves, because several students struggled to pay back their debt.’

This way, fewer students are eligible for study financing in the first place. To Tabea, who will start a different bachelor in Germany soon, this is a feeble excuse: ‘I think they should not try to solve their governmental money issues on the back of international students, since it is clearly up to them to get their money back.’

According to a living expenses table for internationals provided by the RUG website, the average EU student should estimate to spend around 1,000 euros per month, including tuition fees, rent, study costs and insurance. Such costs are difficult to cover for most students’ families by themselves, thus many students try to finance their study on their own.

The RUG website advises international students to rely on ‘studiefinanciering’, financial support from the Dutch government for Dutch and non-Dutch students managed by DUO (Dienst Uitvoering Onderwijs). In order to be eligible as an international student, one has to (as of January 2014) work at least 56 hours per month. Before 1 January 2014, students had to fulfill a requirement of 32 hours per month in order to receive the support.

Value of a bachelor's degree