A fierce debate during lectures on the Israel-Palestine conflict brought a glimmer of hope. Palestinian and Israeli students come together to Make Hummus, not War.
By Christiaan Triebert

It all started when, following the lectures on the Israel-Palestine conflict, an Israeli girl made several emotional and strong statements. Some members of the audience reacted negatively.

‘What she said hurt me a lot’, says business student Daliah Vakili, whose mother is Palestinian. ‘But afterward, she came to the bar where we had some drinks. I think that was very courageous, so I went up to her and said: “Let’s talk”.’

It was then she decided that she and her friend Dan Vider, an Israeli psychology student, should organize an event to humanize rather than demonize each other by cooking and eating traditional dishes together – most importantly the world-famous chickpea dip, hummus. 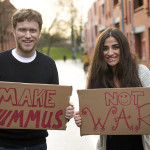 Daliah and Dan have been friends since she met him while she was looking for a new roommate and he was looking for a new room. She invited him to have a look, joking that he could live in the house but should not occupy her room. Dan brought cookies, saying ‘this is a cookie peace agreement’. Although Daliah and Dan don’t share the same political opinions, those cookies were the beginning of a friendship on ‘a human basis’.

Both students had never experienced such a friendship before. It made Daliah think: ‘If Dan and I get along, why can’t we all try to find the human in each other? We are young people. We can make a change. We should talk in a human way to each other – about cookies.’

If Dan and I get along, why can’t we all try to find the human in each other?

Dan’s parents – both Jewish – emigrated to Israel from the Soviet Republics of Ukraine and Lithuania in the seventies. They settled down in Petach Tikwa, a city not far from the West Bank. Still, Dan had never met a Palestinian person until he met Daliah. ‘She’s simply great, I’m happy I got to know her.’

It saddens Dan, who has lost several friends in combat, that in his surroundings, Palestinians are often associated with hate and fear – the total opposite of how he sees Daliah. ‘We should see each other again as people with feelings, as human beings that can have sympathy and empathy for each other.’

Daliah’s mother was born in Jenin, a city in occupied West Bank, but moved for education to Germany when she was in her twenties. Although Daliah was not born in West Bank, she has been actively involved in human rights issues concerning Palestinians for many years due to a traumatic experience at the age of six.

‘As kids, my brother and I were severely assaulted by Israeli soldiers. But even worse things happened to our family members in front of our eyes.’ It is this story that she tells to people who criticize her by saying it’s easy for her to say, since she’s only ‘half Palestinian’ and was born in a Western country.

Even though it would be understandable for her to struggle to sympathize with Israeli soldiers, she remembers a moment that taught her to never dehumanize anyone.

‘I was climbing a palm tree when an Israeli jeep passed by. I was scared, based on past experiences. But then, a soldier stepped out, looked at me, smiled, and waved. He was simply happy to see a six-year-old in from a palm tree.’

Daliah and Dan are optimistic that the dinner they’re organizing can be the beginning of a renewed human connection between Israelis and Palestinians. They’re not worried that the party will devolve into chaos.

Want to eat hummus too?

The ‘Make Hummus, Not War’ dinner will take place in January or February 2015. Are you Palestinian or Israeli and would you like to join? You can sign up by sending an email.

‘The Israelis that I spoke with who are coming are very excited.’ The same goes for the Palestinian students. ‘Although many are very nervous due to their traumatic experiences’, Daliah adds, ‘they’re happy about this initiative.’

Dan and Daliah secretly dream to make a regular event out of Make Hummus, Not War. ‘At the end of the day, we’re all humans with a weak spot for hummus.’