Kalantar is waiting for the apology

He won a lawsuit against the Dutch government in 2012 about discrimination against Iranians. But professor Nasser Kalantar is still waiting for the formal apology.
By Lenja Bystrykh

What happened two years ago?

In 2010 – after a resolution by the Security Council of the United Nations – the Dutch government prohibited Dutch-Iranian and Iranian nationals to enter various nuclear facilities. They were also no longer allowed to follow higher education programmes having anything to do with nuclear armament.

Kalantar – who has Iranian and Dutch passports and has worked as a nuclear physicist at the RUG since 1993 – was no longer welcome at meetings at nuclear facilities such as Petten. Some of his PhDs had the same problem.

He went to court with two other plaintiffs and, in 2012, won for the third time in the nation’s highest court.

‘After we won the lawsuit, I was very pleased. This victory is a step forward for freedom of education!’ says nuclear physicist Nasser Kalantar from the RUG.

‘The ruling of the Supreme Court was even stronger than what we asked for, after they decreed that the Dutch State violated an ethnic group’s right to education and that this was against our constitution and European regulations’, he says.

However, two years later, the government still doesn’t want to admit it was wrong.

It seemed only right that the Dutch government should apologize. Yet when Kalantar and the other plaintiffs formally demanded this from the Ministry of Foreign Affairs in 2013, Foreign Minister Frans Timmermans responded that no official apology was necessary. ‘The Dutch State is harming Iranian people by not acknowledging that their behavior was unlawful and discriminatory’, Kalantar says.

‘What worries me is the mentality of the state and what drives these modes of thinking in policy implementation. The state does not seem to acknowledge how its measures are damaging people who do not deserve it’, Kalantar continues. ‘It is important to discuss the real issues that drive some people in our government to implement such discriminatory regulations in the first place. The fact that such deep discussions do not come up really upsets me.’

Shift to the right in Europe

Today, the regulation against Iranians is gone. In its place, all students and researchers in disciplines which might contribute to dangerous activities are to be screened, regardless of their nationality. ‘A step forward’, says Kalantar.

But he remains disappointed: ‘It’s ridiculous and sad’ at the same time, he says. ‘What else can I do but laugh at the absurdity of the situation? You win the case three times and the other side does not see any reason for having to apologize for wrong-doing!’

Ironically, Norway has recently implemented similar international sanctions resulting in the expulsion of Iranian academics from the country. ‘This is very bad’, Kalantar says. ‘What worries me most is the shift we see to the right in Europe. You can make many regulations that discrimination is against the law, but people’s initial mentality of animosity will eventually prevail if left unaddressed.’

Nasser Kalantar did speak to Foreign Minister Frans Timmermans who was opening the Academic Year. ‘It was impossible to discuss this with him with all the crowd around. I had a brief exchange with him. By the way, my presence there was not because of him. I was there as a professor of the university for the opening of the academic year.’ 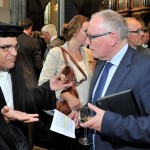 To Mongolia in a Fiat