‘Kids are the ideal scientists’

Next week, on Thursday, she will receive her PhD, but she’s already losing sleep over it: she’s dreaming of shaking the wrong hand and giving the wrong answers. In reality, developmental psychologist Steffie van der Steen (27) has nothing to worry about.
By Anne Carlijn Kok / Traci White

On the contrary, she’s quite well prepared: she’s drilled her most important research findings into her head, and she knows exactly which anecdotes she wants to use. With those anecdotes – especially the jokes that the young subjects of her research made – her voice will grow softer and the real business will get underway. 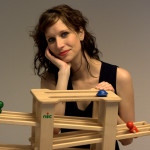 Van der Steen did research into how children handle scientific questions. For three years, she followed the development of 32 children between the ages of 3 and 5. She played games that explored scientific principles such as gravity and air pressure, and asked the kids questions along the way.

Questions whose answers she has known for ever, at least according to one of the children one afternoon. ‘His brother had told him that I knew all the answers and that I was only asking him the questions to test him,’ Van der Steen says. ‘How do you convince a kid like that?’

The questions that Van der Steen asked became progressively more difficult over the course of the three years. ‘An important starting point was to see how the children developed in the realm of scientific inquiry.’ For example, she let the kids play with a marble run, and asked them where they thought the marbles would roll.

She also asked if they could explain what gravity – ‘zwaartekracht’ in Dutch – is. ‘One little boy thought long and hard about it’, she says. ‘He started to count on his fingers and told me that he had four swords – zwaarden – at home. I couldn’t hold back my laughter when he said that.’

Half of the kids in the study have some kind of behavioral disorder. ‘It’s remarkable that those children didn’t perform any worse than the other children’, Van der Steen says. ‘That is often the assumption. In my research, it was clear that they are equally capable, but they have to be given the right amount of attention.’

Another outcome of the research was that children develop in tandem with the complexity of the questions. ‘They rise to the challenge, as it were’, Van der Steen explains. ‘As they get older, they also take the initiative more often in our interactions. It was so nice to see how the student-teacher relationship evolved over time.’

There was one question that she couldn’t find an answer for. ‘Children are very interested in science’, says Van der Steen. ‘Why don’t we take advantage of that? Children are the ideal scientists.’