American student Graham Clark realised his sailing trip was a life-changing moment after reaching shore. ‘You just have to accept your fate and whatever happens, happens.’
By Valia Papadopoulou

‘My father and I flew to Hawaii in July 2014 to get on a 13-meter-long boat and set sail for a character-building trip. Neither of us had any sailing experience in the past,’ says Graham Clark, a 20-year-old bachelor’s student in linguistics.

The journey didn’t start auspiciously: there was no wind for fourteen straight days, which meant that they had to rely on their fuel. Once that ran out, they had to wait for wind in order to reach the coast. In total, their adventure lasted for 22 days.

But fuel shortage wasn’t their only worry. ‘There are somewhere between 5,000 and 10,000 shipping containers which fall off the ships and are floating in the middle of the ocean like an iceberg. There is a chance of running into one of those in the middle of the night, and then? Good luck. But I tried not to think about that, because then you could drive yourself crazy. You just have to accept your fate and whatever happens, happens.’

Thistle, the ship that Graham and his father sailed across the Pacific.

Graham, his father and the captain ran shifts throughout the day and night. Life vests were also mandatory. ‘In the beginning, I didn’t take it seriously, but then I realised that if I fall in the ocean I’ll die, especially when I’m on a night shift, because my father and the captain were usually sleeping and they would only notice the next morning.’

Eventually, they caught a strong wind came and sailed quickly toward the coast. ‘Once we reached it, we first had to buy more fuel, since we still had a day of sailing left. After that, we ordered beer and pizza. I hadn’t had either of those things for many days. They tasted amazing. It was exactly what I needed.’

Part of the journey

When they managed to get home safe, Graham realized that this voyage was a life-changing experience for him and he started appreciating some things more, as he explains. ‘It was really nice to get off the boat and lay flat, because basically with the boat, you are always leaning one way or another. I also enjoy food more. After such a trip, you have a better idea of what you actually need in terms of food, because it’s not like you can go to the store and buy more. You need to be very conscious about what will you take.’ 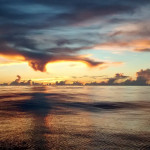 A sunset as seen from the middle of the Pacific ocean.

Although it wasn’t always smooth sailing, Graham is looking forward to his next journey. ‘After spending time off of a boat, I would like to get back to one, even if the same thing happens again. It is part of the journey and you have to accept that the weather is out of your control. I think it’s an experience everybody would benefit from, but it’s definitely not for everybody. It’s not easy. I am really glad I did it. I will never see anything more beautiful than the sunsets and the stars at night from the middle of the ocean.’

Have you or someone you know experienced something that changed your mindset or daily routine, for better or for worse? Valia is looking for people who are studying at the RUG and would like to share their experience with others. If you are interested, contact Valia and you could be the next guest featured on the Life Changing Moments podcast.