Marrying the Kazakh and the Dutch way

Student Anar Suleimenova left Kazakhstan  for the love of her life. She married both the Kazakh and the Dutch way.
By Blanca Civit

Anar Suleimenova is a student in Groningen. But she’s not enrolled at the RUG or the Hanze: she’s doing a distance learning bachelor in Oil & Gas Engineering at the Kazakh National Technical University.

Why would a 24-year-year old student from one of the biggest and richest cities of western Kazakhstan be studying in Groningen?

For Anar, it was one of the oldest reasons of all: love. Marriage, even. Three years ago, she met this cute Dutch guy in her hometown of Aktau and decided to be with him for the rest of her life. 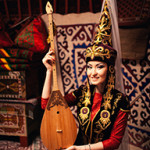 ‘We met in my city at a party of mutual friends. I thought he was kind, warm and polite. At that moment, I didn’t even know where the Netherlands was, but I liked his personality and his view of life. Very soon, it felt as if he was the second half for whom I had been looking my whole life.’

But after six months, Anar’s boyfriend finished his project in Kazakhstan and the lovers were separated. ‘I loved him so much that I could not imagine my life without him, but the feelings were difficult to manage. Sometimes, I was jealous. It can eat you from inside. Other times, I felt lonely and I missed him so badly, and there was uncertainty about the future.’

It made Anar and her boyfriend decide it was time to take a bigger step: marriage. That way, Anar could stay with her Dutchie and live happily in Groningen, where he works.

‘Jealousy can eat you from inside’


However, Anar comes from a Muslim family and her husband was raised Christian. ‘My parents were surprised when I told them I wanted to marry a man from far away, and a bit disappointed, too. They had expected me to marry a Kazakh man and live in my hometown.’

Still, they accepted their daughter’s decision. ‘They think my happiness is more important than religion. And for me, it was a difficult decision, too. But living with him was the thing I wanted most.’

The couple decided on two weddings: a traditional Kazakh ceremony and a wedding in a Dutch church. ‘We thought it was fair to organize one religious ceremony in each country. People in Kazakhstan don’t have any law or obligation to follow a specific religion, so my family accepted my Christian wedding without problems. We also agreed with the Dutch family that we would consider, for the wedding, that God is only one, but that each country or religion changes his name. For me, it’s Allah; for others, it is God.’

‘Living with him was the thing I wanted most’


The contrast between the ceremonies was huge, Anar recalls. ‘A Kazakh ceremony is very serious and solemn: it can last three days. I wore a traditional dress, including the Kazakh hat called saukele, which is a masterpiece made by hand that brings luck to the bride.’

She loved the Dutch festivities, too. ‘It was very relaxed, casual and fun. After church, we had a reception and meals with the attendants. The vicar had the ceremony also translated into Russian  and Kazakh for my family. That was a great gesture, because the vicar was reading the phonetic pronunciation of Russian adapted to Dutch sounds. My parents were very grateful and excited.’ 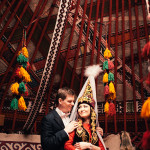 Now, her life is all about adapting to Groningen: ‘a wet place with too many bikes, with people talking loud and living in very old buildings.’

She’s learning to appreciate the huge amount of vegetables and fruit on offer here, because ‘in Kazakhstan, we eat lots of meat every day. We hardly eat vegetables or fruit, in part because some of them are difficult to import.’ She is also preparing for exams and learning Dutch, as well as teaching Russian to children at a language school in Groningen.

She has been here for ten months so far, but will Anar stay forever? She’s  not sure. First, she wants to finish her studies so that she can enrol in the Master’s in Engineering Management at the RUG. She also needs to do her immigration exam and get a Dutch residence permit. But when all that is done, she thinks the world is open to her.

‘I would like to work in the gas and oil field. Then, we could stay in Groningen. But after a few years, we may move back to Kazakhstan so we could both have our favourite jobs there and I would live closer to my family.’