Psychology lecturer Tassos Sarampalis and his editorial team are tearing down walls between the university and the general public through Mindwise, as brand new Groningen Psychology blog. At least, he hopes so.
By Traci White

Mindwise is all about sharing the most exciting research happening in the Behavioral and Social Sciences at the RUG. This week, that includes articles about the effectiveness of antidepressants, why awkward silences in conversation are so painful and how disgust is influenced by sexual arousal.

Tassos Sarampalis, a lecturer at the Heymans Institute, sees the decline of ‘stodgy’ traditional media like scientific journals written and read exclusively by scholars as an opportunity, not an obstacle. ‘Academic journals are now migrating online. Paper in physical form is just going down,’ he says. He hopes that researchers can bridge the gap between the RUG and the world beyond academia through Mindwise.

As editor-in-chief, Sarampalis emphasizes that he is not bridging any gaps by himself. The team includes six editors, and every post is deliberately written in language that doesn’t talk down to the audience. 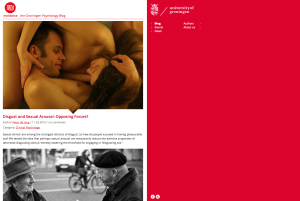 That’s important to Sarampalis: one of his goals is to restore some honor to the word ‘academic’. ‘I hate that when something is described as ‘academic’, it basically means it’s irrelevant’, he says. ‘Academics feel so strongly that their work is highly relevant. It is our responsibility to reach the public’.

Making sure that research connects with readers beyond the university seems obvious, but it is a promising new trend. There are two other RUG faculty blogs (Economics and Business and International Law), but Mindwise is the first standalone site outside of the RUG’s domains.

However, calling it a ‘blog’ is decidedly old school, and Sarampalis sees it as more of a communication tool. ‘It’s a platform next to scientific journals which are not generally accessed by people outside the confines of academia’, he declares.

Scholars at every level – professors, PhD candidates and undergrads alike – can contribute, and public dialogue is encouraged by enabling comments on posts. Ernestine Gordijn, research director of the psychology department, is optimistic about Mindwise’s potential impact.

‘By writing about our published research, we can show the public – including our students and potential future students – how fascinating our work is,’ Gordijn says.

While recruiting future psych majors through Mindwise is a possibility, Sarampalis also hopes the site will inform current students and professors about what’s going on inside the Heymans Institute. ‘We have five floors of researchers and even within this department of 2,000 people, it’s almost impossible to keep up with who’s publishing exciting work,’ he says.

He anticipates that the blog could prompt researchers to approach one another and consider collaborating on future projects, or maybe even an internship. If that happens, odds are good that Sarampalis and the board will blog about it, too.

See the blog for yourself at Mindwise!

Stapel blog is a bad idea