Michaela Carrière’s task is to teach people to recognize each other’s cultural values. It’s not always easy, but it's her dream job. ‘I was waiting for this vacancy for 17 years, so I love what I get to do here.’
By Valia Papadopoulou

Carrière was born in the Netherlands, but due to her parents’ jobs, she lived in countries such as Indonesia, the United States, India and Bangladesh during her youth and only returned to the Netherlands at the age of 35.

Through her experiences, Carrière learned that what is considered a norm in one culture might not be a value in another. ‘When my daughter was three years old, we would sit at the dinner table and she would interrupt her father when he was talking. I would tell her to let him finish, because that is the norm in the context where I was raised’, she says. Since September, her job has been to pass the lessons in intercultural competence on to students of her own as project leader for Intercultural Competence and Communication courses at the Language Centre.

Intercultural competence is the ability to bridge differences between diverse cultures. ‘We are not only talking about dissimilarities between national cultures, but the competence can be applied to bridging organisational and interdisciplinary cultures as well’, Carrière says.

But it’s not just limited to communication. Perception about personal space also varies from culture to culture, and intercultural competence can help students to be aware of that.

Carrière will teach a variety of courses through the Language Centre, most of which aim to acquaint students with a different culture either when they are coming to the Netherlands or going abroad. Other courses intend to help students who have been living abroad to reintegrate back into their own culture. 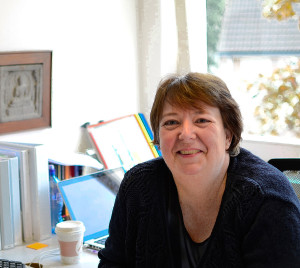 For international students coming to the Netherlands, the courses are meant to help them understand the culture that they have entered and to help them adjust more smoothly to the Dutch academic system.

Differences in academic cultures from one country to the next can also result in problems. ‘For example, one of their most common mistakes is plagiarism because intellectual property is not attributed in the same way in all countries. As academics we have the responsibility to explain to them how we do things here.’

The assumption that all cultures adhere to the same values is something that could actually lead to academic and social failure for students, Carrière adds. And going abroad is not a guaranteed eye-opening experience for everyone: research conducted by Ariana Medina Lopez Portillo in 2005 found that only one-third of people who go abroad ever actually develop the ability to adjust to the new environment. The rest either remain exactly the same or even regress, becoming more negative about other cultures and developing strong stereotypes along the way.

‘As educators, we sometimes take it for granted that students will automatically develop intercultural competence and become global citizens when going abroad’, Carrière says. As such, open-minded students are the most suitable participants for the course: ‘If someone believes that everyone should be like them, then there is not much we can do.’

Overcoming that view of what is polite or rude is crucial for internationals: it’s important for them to know that Dutch people are very direct. That way, ‘they can understand how being indirect is interpreted in this culture.’

Carrière’s classes are not lecture-based but focus instead on interaction with the students by practising differences in cultures, she explains. A range of activities is incorporated into the lessons, but they vary from course to course depending on the level of the students and the specific topic – or country – the course focuses on.

People behave in different ways due to cultural diversity: sometimes, even a simple handshake could evoke judgment, as she explains. ‘A handshake in the Netherlands is quite steady and an expression of your individuality. When you give a soft and gentle handshake, Dutch people doubt the strength of your personality. That judgment is immediate and being judgmental means that you don’t acknowledge there are different attitudes and norms.’

Prior to taking this job, Carrière’s constant travel due to own career meant that she almost implicitly developed such intercultural competencies along the way. ‘I only found out later that there is actually an academic field and I was fascinated. When I started reading about competence, I was able to explain many things that I had unconsciously adapted in the past.’

Although she has been living in the same country for the last 13 years, she can only imagine herself working in a multicultural environment, despite the inherent challenges. ‘My profession has to do with values, so it can be really hard sometimes. But I was waiting for this vacancy for 17 years, so I love what I get to do here.’