On their birthday, Navigators cook for non-members

It is the Navigators’ birthday, and when it is your birthday, you treat your guests! In honour of the association’s 22nd anniversary, around 70 members set out to cook and wash up at other people’s homes on Tuesday evening.
By Tim Bakker / Translation by Mina Solanki

From an elderly couple to several large student houses, anyone who signed up received food. ‘We wanted to celebrate our birthday with more than just our members’, says Daniël Peereboom, one of the organisers of the ‘DiesDiner’. ‘An all-expense dinner in your own home is a nice way to meet people, and it’s also a way to bring positive attention to the association. After the meal, we even do the washing up.’

‘On the menu was a simple yet nutritious pasta with red sauce’
The initiative is part of the Diesweek (birthday week, red.) which was kicked off last Thursday with a barbeque and sing along in the Stadspark and will conclude on Friday with a gala. ‘It will be the largest gala of all the Navigators associations in the Netherlands’, says a proud Peereboom. The cooking initiative was initially aimed specifically at student houses, but citizens of the city also got the opportunity to have student chefs come round and cook for them.

One of the chefs was second year member Sanne van Dam, who also participated in the initiative last year. Together with four others, she visited a house of female members of Gyas (rowing association). ‘The groceries had already been done by the association, so we got an address along with a bag of groceries and a recipe and we set off around six o’ clock. We brought along some wine and they also had some at their house, so that was really nice.’ On the menu was a simple yet nutritious pasta with red sauce. ‘There were five of them and five of us, so for ten people, it was a good recipe and it was also pretty tasty, haha.’ 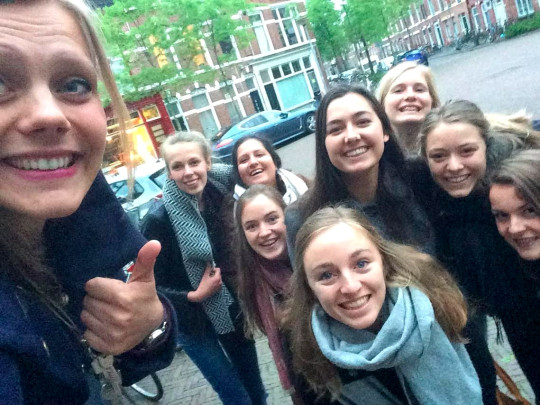 During the evening, conversation largely focused on what life is like in the two organisations. ‘They were very interested in what we did at the association, what a Bible study night is like and those kinds of things. We were able to compare our associations a little since we didn’t know that much about Gyas, either.’ The Gyas girls even got the chance to admire the N.S.G. society later that evening when the ten girls participated in a pub quiz. ‘Did we win? No, absolutely not’, laughs Van Dam. ‘But it was really fun, next year I’m definitely going to do it again!’