Groningen’s international student organizations moved to the Pelsterpand this week, but they’re certainly not the first student groups to call the property home.
By Traci White

Empty beer bottles and abandoned conference tables are about all that’s left of the student organizations on the ground floor at the Sint Walburgstraat. All of the internationally-oriented student groups – KEI, ESN, Aegee, SIB, Aiesec and Teimun – are leaving the location on the sunny Sint Walburgstraat and moving to the considerably darker alleyway of the Pelsterstraat, just off the Vismarkt. 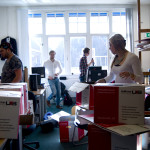 With its classic brick facade, freshly painted walls and spotless floors, no one would mistake the university-owned Pelsterpand for a student house, unlike the rundown facilities at Sint Walburgstraat. ESN chairman Mike Kolman walks from room to room inside the new building on Wednesday afternoon, taking in ESN’s new domain. ‘The whole first floor is for ESN, and I think that’s a good acknowledgement from the university that we’re more important than we used to be’, he says.

The international groups may be new to the building, but up until the early 2000s, the Pelsterpand was home to student organizations such as GSb and the Studentenkrant – the bright pink walls in the basement still bear the hand-painted name of the student newspaper. However, the location was deemed unfit for human habitation and had to be vacated – asbestos, in other words, according to Kolman.

While the now asbestos-free building provides an ideal location for the various groups’ headquarters, the move to the Pelsterstraat is likely also temporary. ‘This will be approximately a 5 year stay’, says Max Dannenburg, chairman of the KEI foundation.

The Pelsterpand has some perks, though. ‘One good thing is that the windows in this place can actually open, so that’s a big improvement’, Dannenburg says. Aegee secretary Josine Rawee puts it more bluntly: ‘The old building was just crap.’

The building at Pelsterstraat 23 is undeniably better, but Rawee hopes that the student house-like sense of community from the Sint Walburgstraat, with its gross, sticker-covered walls, will survive the move. 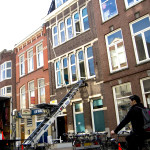 ‘Over there, sometimes we had parties or just stayed late to work, and that’s going to be more difficult here. We can’t be here after 10 without advance permission, but we’re students’, she says. While these six groups have found a new home, there are sixteen that have called Sint Walburgstraat 22A home since 2003. Those that remain still don’t know where they’ll be moving in the coming months.

‘It’s horrible. They just keep them in the dark. At first they were going to go to the Academy building but now they say there’s no space there’, Kolman says, sympathetically.