From the outside, the Hofstede de Grootkade building looks massive. It doesn’t look like an apartment block. ‘It used to be the offices of the Dutch tax department’, says student manager Christian Garrard, who is kind enough to let me in. ‘Half the first-floor apartments and all the top floor are for PhD students only’, he explains while we take the lift to the first floor. ‘In this and the next-door building, 23 single rooms and 13 apartments for couples became available in August for PhD students.’

Indonesian PhD student Vera Dian Damayanti has a single room at the end of the corridor. She moved in a month ago and is studying at the Landscape Centre. ‘The Housing Office actually gave me a choice, because I could also have lived somewhere else. However, I preferred to be on my own. It’s quiet and the room was already furnished’, she says as she sits down on one of the chairs that came with the room.

The rooms even have washing machines and microwaves. However, the main benefit is that Damayanti can study in silence. ‘Although it’s great fun living in an international house, it can sometimes mean that you end up in a crowded place where you can’t focus at all.’

Although all PhD students have their own space, there’s a lot of contact between them. ‘Sometimes I knock on the door of another Indonesian PhD student for a chat – or we communicate on WhatsApp. Most people on my floor come from Indonesia, China or Thailand. So it’s quite Asian.’ 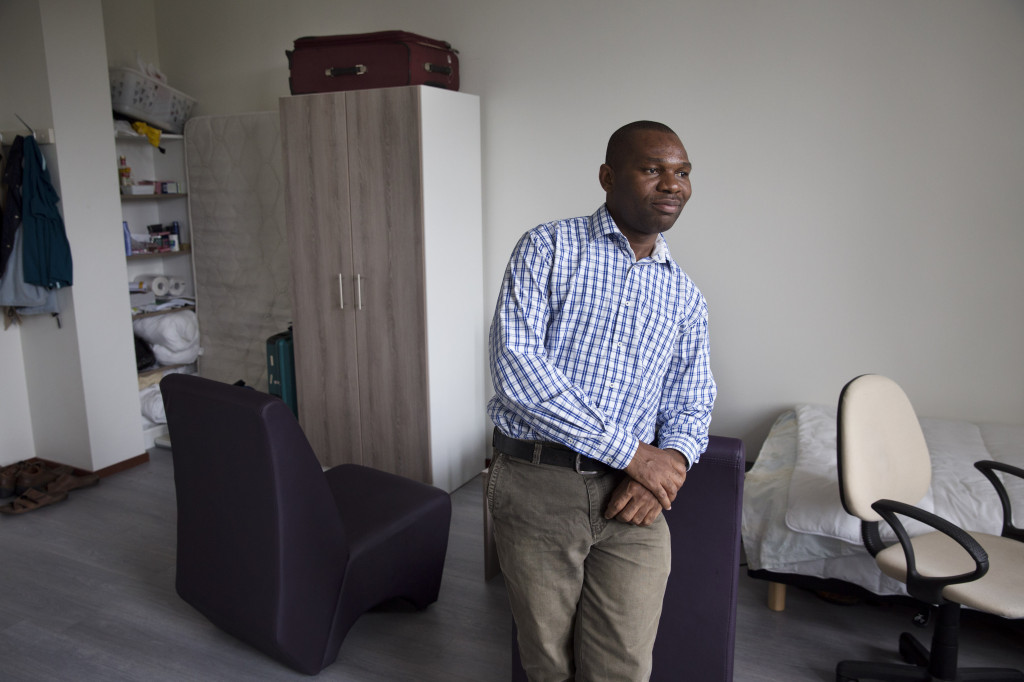 One of her friends in the building is August Fungo, who lives on the top floor. He gives me a firm handshake when I first meet him. Then he looks out of the window, from which he has a breathtaking view of the Noorderplantsoen. ‘I’m not very used to the Dutch weather, but from here I can get an indication how cold it is by looking how the people outside are dressed’, he says laughing.

The Tanzanian PhD student, who is researching international tax law on the internet, also moved in a month ago. ‘Before, I was living in a house with both undergraduate and PhD students. This room is bigger, has more facilities and I don’t have to share the microwave with five others.’

For him, too, it was very convenient that his room was already furnished. ‘The life of a PhD student is like the weather – your living conditions can change. It can be very stressful’, he says. ‘You have to be self-sufficient, so it’s nice if you have a lot of things that are already taken care of’, he says while his washing machine makes a comforting rattling noise. ‘I sometimes have to go home to study for six months, but I think I’ll be here til next year. I’ll definitely stay here until then.’

Above all, Fungo likes the quietness. ‘PhD students need a calm refuge, but sometimes it can be a little lonely.’ That’s why some of the students organized a ‘get-to-know-your-neighbour day’ a few weeks ago. ‘It’s good to get to know each other. There’s good interaction between the residents and since the neighbour day we’ve had a Facebook group where we organize meetings or going out for drinks.’

Damayanti is also glad she got to know her neighbours. ‘We’re all different nationalities and backgrounds, but during neighbour day everyone came down for snacks and drinks, and we exchanged phone numbers’, she smiles. ‘As PhD students, we’re all in the same boat.’