Playing games with the elderly

Only six internationals showed up for a ‘spelletjesmiddag’ with Dutch elderly people. Still, the organisers consider it a success. ‘We’ll try to involve other day care houses as well.'
By Verena Rendel

International students were playing rummikub, chess and shuffleboard with the elderly people living in the Heymans Centre Groningen last Friday. It was a great opportunity to practice their language skills while the elderly residents enjoyed some diversion from their often lonely existence in the retirement centre.

‘It’s as Dutch as it can get’, says Hugo Giesbers, one of the four Hanze students organising the game afternoon. He invited internationals following Dutch classes at the Language Centre of the University of Groningen to visit the retirement home because he and his friends wanted to help old people who could use some company. ‘We thought we needed to make it fun. By bringing international students in, it works both ways.’ 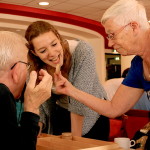 Merle Must, a master’s student from Estonia, agrees. ‘It’s good to learn during playing. The situation is more natural that way. Older people are also very patient, so it’s a good experience for them, too.’

Franziska Ritter, a prospective psychology student from Germany, is sitting at a table to play rummikub with two women. Because Franziska doesn’t know the game yet, she teams up with the lady next to her. Her initial doubts about the encounter with older Dutch people fade away. She laughs: ‘It is fun and I would definitely do it again’.

At the next table, a traditional game called ‘sjoelen’ (shuffleboard) commands the attention of the residents of the Heymans Centre and Henrike Hermanussen, a prospective student from Germany. After the third round is finished, Henrike’s counting abilities are tested.

With loud cheering from residents and caretakers, Henrike counts to 117 – all in Dutch. During the upcoming State Examination of Dutch as a Second Language (NT2), she shouldn’t have a problem with the numbers.

For her, the afternoon is a nice opportunity to apply her new language skills. ‘They explained the game to me in Dutch – all its rules – and it wasn’t a problem. It is super funny to be here.’

Although Henrike likes old people, she was sceptical to take part at first. ‘You never know how the people will be and I was also afraid about their reaction to the fact that I am from Germany. But they were really nice and asked me why I am here.’

For the organisers, the afternoon was a success, too. Everybody seemed happy about the interaction, says Giesbers. ‘We would like to do this more often, and we will try to involve other day care houses as well. It is fun and the internationals can practice their Dutch.’