Prep yourself for university

The first university prep facility for non-EU students in the Netherlands is growing fast. They may be branching out to Groningen next year. If so, the RUG will accommodate them.
By Traci White

Elmira Salmanova is still getting familiar with the Zernike campus, but unlike other new international students, the 19-year-old from Azerbijan is already a poster child for the university: she’s on the cover of a brochure for the business school, advertising their partnership with the university prep facility Holland International Study Centre. 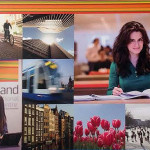 ‘People were saying to me, “you’re famous!”’, says Elmira Salmanova.

‘I didn’t know they would put my picture on the cover of the brochure’, she says, incredulously. ‘People from the Study Centre and also in Baku were saying to me, “you’re famous!”’

The Study Centre, located in Amsterdam, is a facility for non-EU students to prepare for entering Dutch bachelor and master programmes. Two of the trajectories offered by Study Centre – the international foundation year and the English pre-master – include classes about Dutch culture, English language classes and college prep courses.

Salmanova’s cohort was only 15 students, but the Centre estimates 200 students will be enrolling next autumn. That will be more students than the Amsterdam facility can accommodate, and the Centre will have to branch out. Groningen seems like a natural place to do so: roughly 70 percent of the current Study Centre students will move on to Groningen in 2015.

‘We know we are going to have fewer Dutch students as of 2020, so this partnership with Study Centre is exactly what we were looking for and needed’, says Frans Rutten, Associate Dean for International Affairs for the Economics and Business faculty. Rutten and Fiorella Brustolin, policy advisor for the Math and Natural Science faculty, have worked together on the RUG partnership with the Study Centre.

Stephen Orme, director of the Study Centre, is glad to see the Centre growing so quickly, and emphasizes that any future location would not replace existing university services such as language centres or pre-university programmes, both of which Groningen has.

But according to Rutten, drawing from the labour force here to staff the potential Groningen branch makes sense. ‘They will need good language teachers and quite a few of them work here already at the Language Centre.’

As for the Pre-University College, it was set up for Saudi Arabian medical students and teaches graduate students rather than bachelors and masters, meaning there’s no overlap with the Study Centre’s target demographic.

Currently, Study Centre students can enter two faculties in Groningen: Math and Natural Science, or Economics and Business, where Salmanova now studies. ‘We have to admit them provisionally to the RUG in order for them to get their visa, and if they complete the year, they will be accepted here’, Brustolin explains. If students don’t pass, they may still be able to go to another school in the partnership system like the Hanzehogeschool, for example.

But if and when the Study Centre comes to Groningen, where will it be? ‘We will need a physical school, preferably with 6 to 8 classes with room for teachers and support staff. The municipality has a lot of schools, and there are a couple that will be coming available very soon’, Rutten says. As for where the students will live, that also remains to be seen.

Although most students now enter the Study Centre through recruitment branches like the one in Baku where Salmanova learned about it, Groningen aims to attract more students through the admissions office now that they’re publishing the brochure. That means Salmanova will be the first face Study Centre students see in Groningen, which is a little weird for her. ‘I feel like I have to be careful and do really well because I’m on the cover,’ she says, ‘but I’ll know after this semester if the Study Centre classes really worked.’