Writing this blog often gives me the opportunity to meet and talk to some very interesting people and to hear their stories. One of those people is someone I befriended who wishes to remain anonymous out of fear of being jailed – again. I was able to write this blog with his help as he told me a lot about the situation in Egypt regarding freedom of press and speech.

Living in Egypt, I quickly realized that freedom of speech is not as obvious for the people in Egypt as it is back home. Some people – journalists in particular – are jailed for their opinions and the things they write.

The regime of former president Hosni Mubarak was known for oppression of free speech and silencing any anti-regime opinions. It seems like not much has changed in Egypt since then. One only has to look to the newspapers: most of them are owned by the regime or by powerful, pro-regime businessmen. The freedom of press for the journalists working for these newspapers is hard to find, as they are not allowed to write about anything that criticizes the regime.

However, it cannot be said that the current al-Sisi regime controls the media like Mubarak did. The January 25 revolution has brought change (however small) to the degree of oppression of free speech in the media by the regime. When Mubarak stepped down as a result of the revolution, the state control over the media faded. 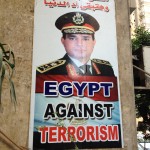 Part of al-Sisi’s propaganda is posters of his own face. They can be found throughout the city.

The vacuum that emerged between Mubarak’s departure and the appointment of Mohammed Morsi as president permitted the number and scope of privately owned media channels to increase. At the moment, the regime tries to control those channels as much as possible. But due to their large numbers, the regime is (luckily) not entirely successful at this.

The oppression of the freedom of press in Egypt is not only an issue that bothers Egyptian journalists. Foreign journalists working here are not always free to publish whatever they want, as was illustrated by the jailing of three al-Jazeera journalists. That included Australian journalist Peter Greste who was released in February after spending exactly 400 days in Egyptian prison.

Why is there so much focus on journalists? The result of so much oppression of freedom of press in the media is that the diversity of news and opinions in the media is considerably less than in Holland, for instance. Together with the propaganda that is used by al-Sisi’s regime, this leads a lot of people to convince themselves of the state’s opinion. So, however wrong it may be, this oppression works in some ways.

But not only journalists have to watch their words and publications. The regime looks for those who are against them, regardless of age, gender or profession. One of the direct results of suppressing free speech is that at least 10 other journalists (besides the al-Jazeera journalists) are jailed in Egypt, as well as at least 16,000 other political prisoners (as of February 2015). An important indirect result is that this suppression also causes opposition, as there are still people who are trying to show the truth.