Reading people at the Human Library

Don't judge a book by its cover – that is the main principle behind the Human Library project, which was hosted in Groningen for the second year this weekend.
By Alina Holz

The overall goal of the project, held on 22 and 23 May in the Public Library, is to deepen mutual understanding and to help people overcome their prejudices. During the event, around 20 ‘human books’ were available to be checked out to share their story with interested readers.

Two years ago, International and European Law students Julia Echanove and Barbara Hermann decided to launch the Human Library project in Groningen. The event is based on a Danish concept which was initiated by the non-governmental youth movement ‘Stop the Violence’ in 2000. After participating in a workshop by one of the project’s creators, Ronni Abergel, to promote the idea to potential new organisers, both Julia and Barbara were convinced to establish the event in Groningen.

In order to find ‘books’ – people – that were willing to share their stories, the two initiators had to start completely from scratch. But via personal contacts, approaching people on the street and contacting different organizations, word of the project soon spread and people who were interested in participating began reaching out to Julia and Barbara. Around 50 volunteers, mostly RUG and Hanzehogeschool students, took part in the event this year.

When entering the library, readers can consult an extensive catalogue of all the books, most of whom are people who represent common prejudices: book titles included ´HIV´, ´Blind´, ´Transgender´, ´Ex-Drug Addict´, ´Converted Muslim´ and ´Feminist´, among many others. Most of the books were available in multiple languages and a human dictionary – a translator – was also an option for the conversation. 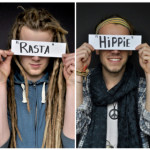 Several of the many titles available in the Human Library. Source: http://www.humanlibrarygroningen.com/

‘Every reader can decide for themself which book they are interested in reading’, Barbara says. ‘We would describe our target group as people that are in some sort of grey area, who are generally open-minded but are also aware that they have some prejudices or believe in certain stereotypes. The first mistake that people make is to think that they don´t have any prejudices, but everyone does to some extent and it is important to become aware of them as well as to challenge them.’

Although Barbara says there weren’t any issues last year, a training course was held before the actual event takes place where all possible scenarios are simulated and the books and volunteers are instructed how to react if they find themselves in an uncomfortable situation.

By talking to the books about their stories, people have the opportunity to overcome their own prejudices and broaden their understanding of people who are different from themselves. That was English language and culture student Sanne van Opstal’s experience: ‘I have decided to participate in the Human Library event in order to broaden my mind, to listen to other people´s stories and to see whether the image that the media create about certain groups is actually correct or not’, she says.