Smarter traffic to save the elderly

Ailing elderly people on the roads do not make traffic any safer, neither for themselves nor for others. Technology and infrastructure should provide salvation, says traffic psychologist Dick de Waard.
By Christien Boomsma / Translation by Mina Solanki

Overly cautious elderly people with poor eyesight can be life threatening on the roads. They do not drive fast enough when merging on the highway, hesitate for ages before entering a roundabout and putter along at 60 km/h on provincial roads. Should we take their driver’s licenses away?

Certainly not, says Dick de Waard, professor of traffic psychology. Next week, he will give an oration about mobility retention for the elderly on the roads. ‘Mobility is extremely important. When people can no longer move about, they waste away and are far more frequently depressed. That is something you don’t wish on anyone.’

However, he must admit that the elderly are involved in accidents more than average – this is the same with youths who have just obtained their driver’s licenses. Their vision deteriorates, their reaction time is slower and if they are involved in an accident, even something as simple as falling off a bike, the damage is greater: breaking a hip is common. And the problem is only getting worse. After all, there are a growing number of elderly people who have had a driver’s license their whole lives. ‘They are used to comfortably getting from point A to point B and being able to take luggage along with them. That is not something they would give up at the drop of a hat.’ 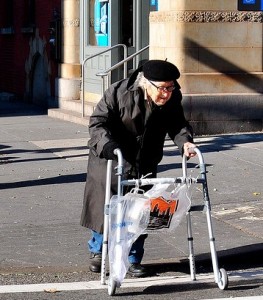 De Waard says that the elderly often adapt their behaviour, for example by using more space when turning left or only taking familiar routes when driving. But this does not always make it safer: what if there is a byway? They even struggle when cycling or walking. They join the end of the queue at a traffic light, neglecting to give themselves enough time to get to the other side in time.

Technological innovations in cars and adjustments to infrastructure could offer solutions, he thinks. But De Waard emphasises that good research into Advanced Driver Assistance Systems, among other things, is necessary. He researched a system in which the driver was urged to go faster when merging on the highway, for example. ‘But that only led to more stress’, he says. ‘It would probably work better with more specific instructions: ‘Go faster and merge after the black car.’’

Such a system does not yet exist, De Waard admits, but that does not mean that it will not be there in the near future. ‘Who would have thought that telephones would have GPS ten years ago? And nowadays, a Tesla can drive itself on the highway.’

The automatic systems are not yet safe enough, says De Waard. ‘If something goes wrong, the system gives the control back to the driver, but then they have to assess the situation very quickly.’

Significant gains can also be made through infrastructure: even something as simple as adding a traffic island would mean that motorists do not have to assess two traffic flows at once. Another option is the separation of traffic flows, keeping cyclists and cars further apart. De Waard also experiments with the effect of 3D objects by painting obstacles on the road. It turned out that blocks along the side of the road went unnoticed by road users; however, they did have a tendency to avoid drain covers. ‘You could paint a drain cover in front of a bollard so that people will not cycle into it.’

De Waard is aware that there is no singular solution. ‘It is always a combination of these kinds of measures’, he says. But the fact that something has to be done is clear. Perhaps the students of the brand new English taught master – traffic psychology & sustained mobility, which will begin in September – can come up with something. ‘It is a growing problem.’

Play with the elderly