So you can’t go home for Christmas

Most Dutch students will probably enjoy Christmas thuisthuis with their family over gourmet treats, but what about the international students that aren’t able to go home?
By Maaike Vos

Valia Papadopoulou, a 24-year-old journalism student from Thessaloniki, Greece, is one of those students staying in Groningen. For the first time in her life, she will not spend Christmas with her family.

‘It’s a really cynical reason, but the flights before Christmas were three times as expensive as at regular times.’ That’s why she will depart for Greece on the 27th of December instead.

She will spend her Christmas days together with her Greek boyfriend in Utrecht. ‘Part of me feels sad because we party really hard in Greece, and all my friends and family will be together. But I’m also happy to visit a new city in the Netherlands.’

Her brother, who is studying in Munich, will be in Greece for Christmas, so Valia’s family is a bit disappointed about her absence: ‘I’m the only one who won’t be there’, she says. 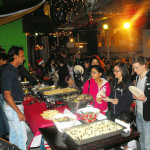 ‘People tell us: “This is the only place where I can be myself.” // Photo International Cafe

Vania Ivena Kurniawan, an exchange student from Jakarta, Indonesia, will also stay in the Netherlands. She was planning to celebrate Christmas in Germany, but unfortunately, her plans had to change. ‘I got robbed in Amsterdam, so I have no money to go there anymore.’

She’s not so sad about that, though. And her family understands that she wants to spend Christmas in another country. ‘It is such an experience to celebrate Christmas in the Netherlands. In Indonesia, they don’t have as many Christmas decorations and trees as they have here.’

Azemina Balijagic from Bosnia and Herzegovina will also spend her Christmas holiday in Groningen due to work. ‘Also, my family won’t be celebrating Christmas together since they all have separate plans’, the 21-year-old International and European Law student explains.

Just like Vania, Azemina is totally okay with the situation. She will have her Christmas dinner with friends. ‘My family is fine with it. Most likely, they will visit me when my exam period is done.’

People couldn’t believe that we really offered them a free dinner.

The dinner was held for the first time in 2008 and they were able to accommodate 50 people. ‘Two of the international students that attended the dinner had just arrived in Groningen. The shops were closed, they had no gas or lights. They told us: “If it wasn’t for you, we would have been lying in our beds to get warm”.’

Although the first dinner was an instant success, some people were sceptical about it. ‘The first responses were a bit reluctant. People couldn’t believe that we really offered them a free dinner. The university also had its reservations. But the second year, they asked us if we were organizing it again because they heard so many good stories.’

Nowadays, there is enough space to welcome 100 international students. ‘I myself have lived abroad, so I know what it’s like to be alone for Christmas without family or friends. We want them to feel at home’, Paul says. Based on the responses, they succeeded. ‘People thank us wholeheartedly, also one student said that International Cafe is one of the few places she really feels at home.’