With her natural, homemade skincare products, master’s student Anita van der Bos is one of the vendors at the monthly market on the square in front of the Harmonie building. She will be there this coming Saturday, 14 May, during the 50th anniversary of the Ommelander Market. ‘I started making soap in June, and I was hooked straight away!’
By Koen Marée / Translation by Traci White

You can’t miss it: ‘Forest Fragrances’, the name of her business, is prominently written on the banner hanging in the booth behind her. The table in front of her holds an array of soaps, scrubs, bath salts and other skin care products in all shapes and sizes. It all began as a simple hobby for the student, who also manages to follow two master’s programmes at once: religious studies and philosophy.

‘I actually tried gardening at first, but that was a complete bust’, she says with a laugh. ‘At the time, I was trying to go sugar free, and I was paying close attention to the labels. When I was showering one day, I was studying the label of my shampoo, and I thought, ‘there must be another way.’ I started looking around on Google and YouTube.’

Soap does not go bad

The instructional films had the desired effect. She stocked up on basic supplies and, after a bit of finagling, Van der Bos’s first recipe was ready. ‘Then I started looking into the rules. You have to have your products tested, they have to be safe. But in the Netherlands, that costs a lot of money: you’re out 100 euros for one recipe.’

After searching online, Van der Bos learned that it can all be done cheaper in England. ‘Now, I have a license for a basic recipe that I can adapt into eight varieties, and that cost 179 pounds. That is much less expensive.’ The development costs were a doozy, though: ‘I think I’ve spent around 3,000 euros. I have no choice but to sell if I want to maintain my hobby.’

The first market where she sold her wares was the WinterWelVaart on the Hoge and Lage der A. ‘I had already sold them in a shop, but there, it was really just me with my own products. I brought way too much, of course, but soap doesn’t go bad, thankfully.’

‘Even my boyfriend has to leave the room’
If you think that you need access to a laboratory to mass produce soap, you are mistaken. Van der Bos simply uses the same kitchen where she makes her breakfast each morning. ‘I think I may have the cleanest kitchen in Groningen. If I am making soap, there can’t be any food in the vicinity. I can’t have any pets, either. Even my boyfriend has to leave the room before I can bring out the scales, the various sorts of oil and other natural materials that I use. In total, I have six moulds, and I can make 30 pieces of soap with them.’

She participates in several markets each month. She bikes together with her boyfriend to and from the events, and he helps her clean up at the end of the day. ‘He said, ‘Don’t let it get out of hand!’’ The cheerful student has managed to combine her passion with two research master’s: ‘It’s pretty easy to do both. I think that I spend about four hours a week on Forest Fragrances, although that doesn’t really include time spent preparing. But for me, it’s really my way to relax. It’s cheaper than therapy.’

This weekend, she will take part in the golden jubilee edition of the Ommelander Market. ‘A lot of international students already know about my business, but not many Dutch students do. I don’t know why that is the case. I hope it will be busy on Saturday. There will be a chef on site and the merchants will be dressed in traditional clothing. There’s also a special beer booth for the occasion. If business is slow, that’s where I’ll be!’ 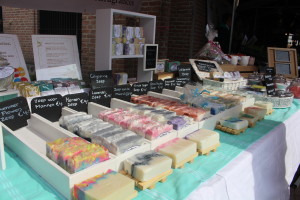