A little background on how we Dutch view our bikes. There are two types: nice, new expensive bikes, mostly used during the day by adults who live outside the centre of Groningen, and the category we call ‘stadsfiets’, or ‘city bikes’.
By Marian Tjaden

A stadsfiets should just function, which basically means it should have two wheels, a saddle and no flat tyres. That’s it. Extras like front and rear lights, brakes or mudguards are not important. A stadsfiets will get no maintenance at all and no repairs beyond those that are absolutely necessary. The reason is simple – bikes are never safe downtown. They either get stolen or wrecked. 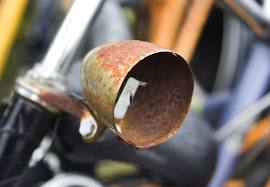 Regarding theft, there are three scenarios: 1) ‘Organized crime’, which involves somebody with a big van who – in the middle of the night – will put 10 or 15 of the nicest looking bikes into a van, saw off the locks later and sell them in another city to shady bike traders; 2) It gets stolen by a junky, who’ll immediately try to sell it on the street to people walking by , whispering ‘Wanna bike, wanna bike? 10 euros’, to get some quick cash to feed their addiction; 3) The third scenario actually involves students who become victims of another kind of theft, not necessarily of the whole bike, but just its most important parts, like the front wheel or saddle. Well, what can you do, as you have to get home? So you ‘borrow’ someone else’s front wheel or saddle. These parts can be taken off in less than a minute if you know your basic bicycle anatomy.

So to prevent the above, you have to take precautions. Rule number 1, always use two locks, one for the back wheel and an extra chain lock to lock the front wheel to the frame! 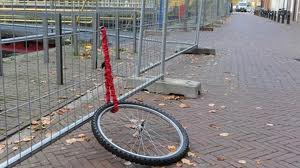 Amongst professionals there is debate about rule number 2, chaining your bike to something solid. This will prevent it disappearing into a van. It also prevents a typical and very irritating student night-time activity, which is wrecking other people’s bikes for fun.

That happens when you park your bike in the wrong place at the wrong time, for instance on a Thursday night on a road that is always busy when drunken students leave the pubs to walk home. If you go by rule number 2, you reduce the chance of finding your bike hanging three feet in the air from an iron gate or a tree. 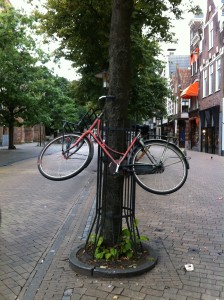 You also prevent it from being thrown into one of the canals, where it will join hundreds of other bikes that lie in a pile just below the surface. (By the way, that’s why you should never jump off a bridge to swim on a hot day. You could easily get yourself killed by landing on some rusty bike parts!)

But rule number 2 has to be used carefully. It can irritate vandals who will then just kick at the front wheel, especially when you’ve parked your bike neatly in one of those handy bike holders built into the pavement. It just takes one fast kick and the front wheel is bent, making the whole bike unusable. That’s why it’s best to always park it next to the bike holder and just chain it to it. That way the front wheel stays free and is more difficult to wreck. 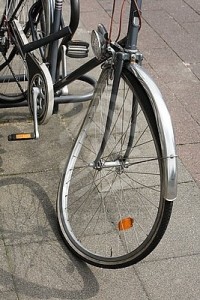 Have any observations for this column? Mail m.i.tjaden@rug.nl