Over the last few years, the Islamic State of Iraq and Syria (ISIS) has caused irreversible damage in the cradle of civilisation, destroying 2,000-year-old Syrian artefacts and temples. Is there anything we can do to save these symbols of our cultural heritage?
By Valia Papadopoulou

ISIS and the Threat to Our Cultural Heritage: What Can the World Do? 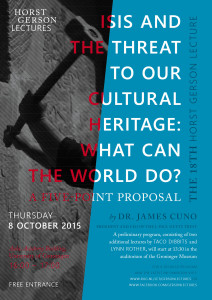 The eighteenth Horst Gerson lecture will be given in the Aula of the Academy Building at 4 p.m. on Thursday, 8 October. Dr. James Cuno, president and CEO of the J. Paul Getty Trust, will be the featured speaker, following a preliminary programme with two lectures by Taco Dibbits and Lynn Rother at 13:30 in the auditorium of the Groninger Museum.

The lecture series is named for a German-Dutch art historian whose specialisation was 17th century Dutch and Flemish art. In 1965, Gerson was appointed as chair of art history at the RUG, a position which he held for ten years.

American art historian James Cuno’s lecture, part of the Horst Gerson series, will examine the current situation in the Middle East which has been precipitated by ISIS, focusing on the destruction of cultural heritage by the group. His goal is to propose five ways in which the international community ‘must respond to the destruction of cultural heritage by ISIS’. ‘But, in the end, it will require the full restoration of social, political and economic stability in the region’, Cuno says. ‘That is the greatest challenge.’

While that daunting task looms, in the meantime, it is vital to stop ISIS from causing further damage. ‘We have so much to learn from the world’s cultural heritage about the genius of our ancestors and the interrelatedness of their many, different cultures.’

‘We should feel a great sense of responsibility for the preservation of the world’s artistic legacy. Unfortunately, now, all of a sudden, in a blink of an eye, much of it is purposely being damaged and destroyed. We should feel collective guilt about our not being more active in trying to prevent this. ’

Also known as the Venice of the Sands, Palmyra is an ancient Syrian city that was once the crossroads between the Roman and the Persian Empire. The historically rich ruins were among ISIS’ victims over the last few months. Palmyra has a prominent place in Middle Eastern history, and many of its artefacts and temples were destroyed.

‘The importance of Palmyra is its setting and its historical narrative. It is a very well preserved city of the early first millennium AD, located by an oasis in the Syrian Desert’, according to Lidewijde de Jong, a lecturer at the RUG in the archaeology department and chairperson of the Centre for the study of Culture, Religion and Society in Greco-Roman Antiquity.

Today, objects from Palmyra can be found in museums across the world, serving as characteristic examples of the unique cultural mixture of Palmyra, according to De Jong. But the cultural heritage of Syria and Iraq is in extreme risk at this moment, and ISIS is not the only threat. ‘It is also due to widespread looting, stimulated by trade in illicit antiquities in the western world and Asia.’

There has been at least one unforeseen positive that has emerged from the ISIS menace, according to De Jong. ‘It has already lead to several initiatives for the safeguarding of cultural heritage and more general awareness about current threats to cultural heritage spreading.’

These initiatives may not prevent future attacks, but they might lead to measures and better legislation to prevent the sale of illicit antiquities. As an archaeologist who has worked in Syria for 15 years, De Jong’s main hope is a peaceful solution for the people of Syria and the chance to rebuild their country.

Yet Cuno sees ISIS as a very real threat beyond the Middle East as well. The group has been very successful and is likely to only continue growing, he explains.

‘Anything that seems to show evidence of difference will be destroyed’


‘ISIS’ members manifest themselves to the destruction of everything that ISIS sees to be different from its worldview’, Cuno says. ‘Anything that seems to shows evidence of difference, whether it is an individual, a religion, or a work of art, will be destroyed. That’s people, landscapes and cultural property. There isn’t one particular aspect that threatens humanity, but rather all of it.’

Among ISIS’ main activities, three are considered to form the most serious threat, according to Cuno. ISIS challenges the nation-state system, promotes ‘a caliphate world that doesn’t recognise national borders but rather recognises adherence to a particular theological ideology’. Moreover, ISIS brings the representation of different cultures in the world in peril.

‘ISIS wants to destroy manifestations of world views that are different than its own, whether those views are millennia old or much more recent. The existence of different points-of-view in the world is seen by ISIS as a threat to its hegemonic view of its particular interpretation of Islam.’

‘For those of us who believe in a cosmopolitan view of the world, one that promotes tolerance of difference and respects the interrelatedness of the world’s many cultures, ISIS must be defeated’, Cuno says.

He believes that ISIS can ultimately only be defeated when economic and political stability returns to the impacted nations. ‘The destruction of cultural property has a negative effect in the region. It contributes to its ongoing and deepening dysfunction, and it is this dysfunction that is causing the humanitarian migrant crisis the world is seeing right now.’ 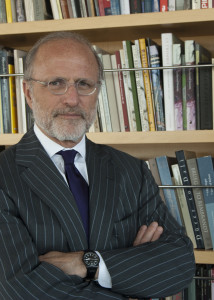 With regard to the destruction of cultural heritage sites, Cuno thinks that unless we stop this threat to human life, historians of the future can only hold people of our times responsible.

‘What is happening with ISIS at the moment has happened many times in the past and in many parts of the world. However, we haven’t prepared ourselves to prevent that from happening again in the future, and that is also because we can’t agree to work together out of self-interest’.

Heritage and history themselves could hold the key to their own salvation, Cuno believes. He wishes that we would ‘learn from the past and avoid repeating the same mistakes time and time again’.

Groningen in the Golden Age

In a rubber dinghy to Europe