The unprecedented numbers of Syrians fleeing their country and seeking respite in Europe has gripped the world, and students in Groningen have decided to take action to welcome and aid as many refugees as possible.
By Valia Papadopoulou

Two German bachelor’s students in International Relations and Management, Victor Fickinger and Maximilian Power, are the founders of the ‘Refugees Voice’ project, which aims to help refugees and raise awareness. 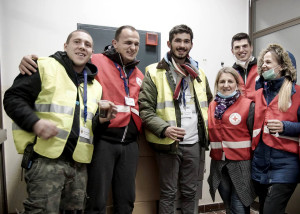 ‘We were following the news and we were informed about the situation. We had to set up a Non-Governmental Organization theoretically for the University, but since we were looking for ways to help, we decided to take our NGO to the next level’, says Power.

Fickinger and Power are asking for donations in order to aid refugees in Croatia. ‘Luckily, we have friends in Zagreb and they have already collected a lot of clothes. So, donations are being used to buy food and water for the refugees’, he explains.

Besides providing financial support, Fickinger and Power are seeking to fight hostile attitudes towards refugees. ‘We created the Refugees Voice platform for refugees to share their stories with the new community they are living with. We have already interviewed some of them in Berlin, Groningen and Dobova, and we will start publishing the interviews soon’, Power says.

‘We just want to show people who refugees really are and give them the opportunity to explain what they have gone through so far. If people knew more about the tragic experiences and the motives to leave, xenophobic attitudes could change. I hope we can contribute to a better welcome that way’, says Power.

To donate to Refugees Voice, visit www.betterplace.org. All refugee stories will be published at http://refugeesvoice.com.

Helping Anna at the Border

Anna Koslerova, a 21-year-old bachelor’s student in Psychology, will spend the next few months in Ljubljana, Slovenia as an Erasmus student. She lives very close to the Slovenian-Croatian border, so she decided to volunteer. 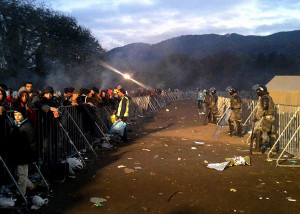 ‘Together with a Polish girl, we visited the camps. We bought water and we gave it to people who hadn’t had water for the last 24 hours. We knew what we were doing could make a difference’, says Koslerova.

However, since she couldn’t afford to buy enough water and food every time she was visiting the camps, she shared her experience on Facebook and asked if there were any students who would like to help refugees. ‘People responded immediately by sending money to my personal account. I was overwhelmed and very happy because I never expected something like that to happen’, Koslerova recalls.

A group of volunteer students has now set up a Facebook page called ‘Helping Anna at the Border’. They have also opened a savings account where people who are willing to support their effort can send money.

‘We use the money we collect to buy food and water every time we visit a borderline. We’ll also contact some groups that I already know and provide them money to buy whatever they need. It’s not only about donations, though: it’s about raising awareness, it’s about going home and talking to your roommates about this and hoping they’ll talk to someone else. It’s more about letting people know that this is happening and this is real’, she adds.

Although many of the camps in the Slovenian-Croatian border were closed, Koslerova urges people to help in every possible way. ‘Winter is coming and if we don’t do anything about the situation, people will freeze to death. They are not used to our climate. They will get sick and if their immune system, is not strong they will die.’

If you would like to contribute, send your donations to:

‘The first time I visited the camps in Slovenia, I was scared. It was a highly militarized area. Police officers were wearing bulletproof jackets and they were carrying automatic weapons and pepper spray. When you see this, you automatically think something bad is happening here’, Anna Koslerova mentions.

Initially, Koslerova and the other volunteers weren’t allowed to get close to the area where refugees were being held. ‘After a couple of hours of waiting and only when the police saw the water we brought, they were convinced that we had come to help, so they let us get closer.’

Refugees are being treated disrespectfully in most cases, Koslerova explains. ‘Some of them hadn’t eaten for days or just had a piece of bread and a bottle of water. In addition, no shelter or tent was provided to them. The toilets were the most disgusting thing I have seen in my entire life. It was horrible. They are being treated like animals kept in a fenced area.’

Koslerova describes nights at the camps as inhuman, since the low temperature and the lack of shelters makes it impossible for refugees to sleep. ‘One guy told me that he had one hour of sleep for the last week. The temperature is five degrees outside and many of them were just staying awake.’

The absence of communication with members of their families who are still in Syria makes their already harsh journey to Europe even more difficult. ‘Last time I was at the camps, there was a girl standing by the fence and crying. She told me that her mom was still in Syria and she had a heart condition. She wanted to get in touch with her. A lot of people have been asking to use my phone and get in touch with their families, actually.’

Refugees’ biggest fear at the moment is what will happen next. They don’t know what is happening to them, according to Koslerova, since they are not being informed about where they are going next or for how long they have to stay there. ‘A lot of people were asking me because I was wearing a high visibility jacket which all the volunteers have to wear, and I had no idea how to answer to them. I would ask the police, but they also had no information. The three phrases we used most were: ‘thank you’, ‘sorry’ and ‘good luck’. Refugees just want to have basic human rights and a normal life, like being able to walk to the store alone and buy some food.’

Evert Sulman, a communications graduate of the Hanze University of Applied Sciences, started his own initiative in September: ‘Groningen Verwelkomt’ (Groningen welcomes). ‘After the city council decided to provide shelters to refugees, I was looking for ways to assist. Since refugees were coming to Groningen, I knew I had to do something’, Sulman explains. 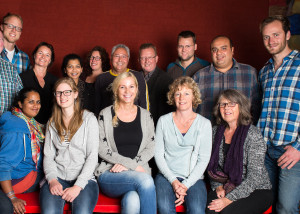 He met up with a dozen people who were also willing to volunteer and together, they decided to prepare welcoming packages for the refugees. ‘Within eight days, we had collected more than 800 welcoming packages’, he says.

The packages contained a Groningen koek – a local cake – a hat and a scarf for the winter, and playing cards so that refugees would have something to do while they are waiting to register.

‘Refugees were really happy about it and felt that they were sincerely welcomed in Groningen. If more refugees come in the future, we’ll do it again. At the moment, we are helping by coordinating a lot of initiatives which aid refugees in Groningen’, Sulman mentions.

In addition, they have organized an information market where volunteers from different organizations will be present to inform citizens about ways they could help. ‘It will take place on 15 November. People who would like to volunteer will be able to sign up on that day’, he explains.

‘We are also planning to help refugees learn Dutch and understand our culture, so that they can integrate easier in the society. But, we are in need of volunteers who are able to teach a language or who have other communicational or organisational skills’, Sulman adds.

If you would like to volunteer, send an e-mail to: groningenverwelkomt@gmail.com