German RUG students Katharina Hilger wanted to help the people who came to the Netherlands as refugees, but she wasn’t sure how. She decided to organise a conference to make it easier to see things from the perspective of the refugees themselves.
Text and photo by Valia Papadopoulou

The Netherlands received thousands of asylum applications in 2015, and thousands of people across the country have extended a helping hand to those who are granted refugee status to smoothly integrate into Dutch society. 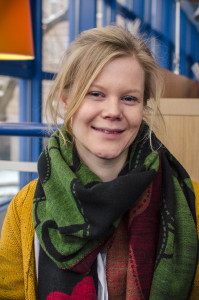 Katharina Hilger, organiser of the ‘Refugees: A Different Perspective’ conference.

That includes Katharina Hilger, a 24-year-old master’s student in Psychology from Germany who is organising a conference this Thursday to raise awareness and inform students about ways they could actually help.

‘I am really interested in the situation and I want to help, but I can’t visit a refugee camp as a volunteer due to my academic responsibilities’, she says. ‘I decided to organise something on my own to inform students about what the situation really is and how they could assist by inviting refugees to share their stories and reply to their questions’, Katharina explains.

She has also observed how, despite the large number of refugees coming to the Netherlands, not all Dutch people are always very open or nice towards them.

Two Syrian refugees who are currently staying in Groningen will speak at the event and tell the stories of how they managed to come to the Netherlands. ‘Only by giving refugees the chance to talk about what they have gone through will people be able to understand their perspective’, Katharina says.

During the conference, attendants will have the chance to ask the two refugees anything they would like to know. ‘What I would like to understand is how refugees perceive the locals and whether they feel welcome in the Netherlands or not’, she says. 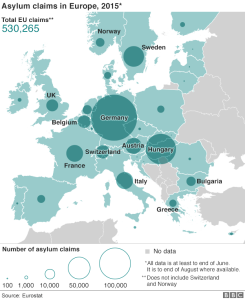 This graphic from the BBC shows the number of asylum claims made across Europe in 2015.

Katja Kiepe, a representative of Humanitas, a Dutch non-profit social service in Groningen, will also be speaking. Members of the group Groningen Welcomes Refugees and Max Power, a bachelor’s student in International Relations and founder of the Refugees Voice project, will be there to talk about their initiatives and goals for the future as well.

‘By combining representatives of volunteer organisations and refugees as speakers, we can inform people effectively about ways to contribute to the situation’, Katharina hopes.

The German student extended invitations to RUG researchers to join the conference as well, but disappointingly, they refused. Initially, they declined because there wasn’t an exact date for the event, but even once a place and time had been sorted, none of the academics she approached could make it.

‘When I offered them the opportunity to choose the date, they said no, and when I chose the date, I got the same response from them’, she says. The volunteer organisations, on the other hand, had a completely different attitude. ‘They asked me to finalise a date and told me that they would make sure to be there. It was so nice to see such a reaction.’

Katharina hopes the conference will encourage people to refrain from judging refugees without knowing their background. She feels that the media’s framing of the refugee crisis doesn’t always depict reality.

‘We can’t judge them the same way’
Sometimes, the problem lies in the fact that the media tends to lump together those who come to Europe fleeing war in their country, and those who are coming for economic reasons. ‘This makes it difficult for people to understand the situation, but they have to realise that those two groups are dissimilar and we can’t judge them the same way’, Katharina says.

Many of the refugees from Syria are highly educated and, as such, are prepared to work and pay taxes, but are typically not allowed to do so here. Being able to work in the Netherlands is a major obstacle to them finding stability in the Netherlands, she believes. ‘Employers shouldn’t deny hiring those people. I think everyone has to contribute to this so that we can help them’, she adds.

Now that all the details have been sorted, all Katharina can do is hope that the conference will have a strong impact on people. ‘I arranged this event for the refugees. It would be really disappointing for them if few people join. They have a really interesting story, so I think people should grab the chance and get to know them better.’ 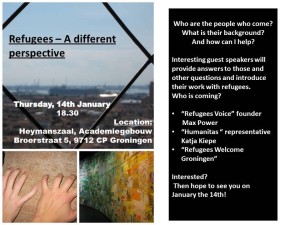 ‘Refugees: A Different Perspective’ will take place at 18:30 on Thursday, 14 January in the Heymanszaal at the Academy building.